An American woman who survived a mistaken attack by Egypt’s military on her tour group is urging President Trump to confront Egypt’s president and make him take responsibility.

Helicopters built in the U.S. were used in a 2015 attack that killed April Corley’s boyfriend.

Some members of Congress are pointing to that incident as they try to block a deal to sell 10 more American-made Apache helicopters to Egypt. CBS News’ Errol Barnett spoke with Corley about the attack and how the injuries she suffered changed her life.

Corley is a Hollywood stuntwoman and dancer who has appeared in movies and commercials and even choreographed moves for Madonna.

“My life was really about glitter and rhinestones and roller skates and I was living my dream,” Corley said.

But while on a vacation to Egypt in 2015 with her boyfriend, Rafael, Corley and her tour group were attacked in the desert.

“I was thrown to the ground by, like, what felt like a mysterious force, but when I looked back, the sand was black, and I got up, and I couldn’t walk,” she said.

Corley said she laid there for nearly four hours calling out for Rafael. He and 11 others died in the attack that she would later learn was carried out with helicopters were flown by the Egyptian military – and made by the United States. 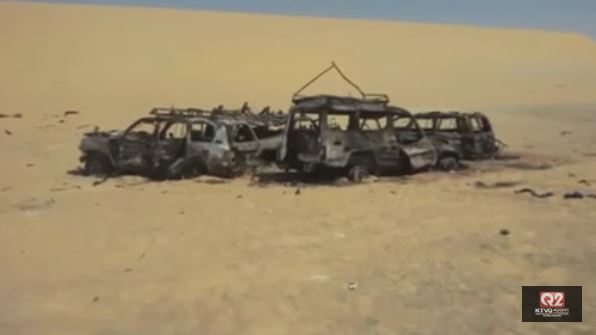 “There was blood everywhere, and the helicopters kept coming back and shooting at us,” she said. “Egypt has said that they thought I was a terrorist.”

Corley said she has no idea why they’d think that.

“Because we had no weapons. We had permits for each tourist destination that we were going to,” she said.

Egypt’s tourism ministry said the group was in an area “off-limits to foreign tourists” and “were mistakenly dealt with.”

“I went to the beach recently to meet some of my girlfriends, and a helicopter came over, and I ran in fear for my life,” she said.

The State Department told CBS News it has raised Corley’s case with the Egyptian government. Both she and Vermont Senator Leahy said they hope President Trump will bring this up with Egypt’s president when they meet next week at the White House.