Federal Reserve chairman Jerome Powell praised the “strong” U.S. economy in a speech Wednesday, sending stock markets higher after seeming to forecast an eventual end to the central bank’s series of interest-rate hikes over the past three years.

“Interest rates are still low by historical standards, and they remain just below the broad range of estimates of the level that would be neutral for the economy ‑‑ that is, neither speeding up nor slowing down growth,” Powell said.

Stock markets immediately soared on the statement, which investors interpreted to mean the central bank would slow its pace of rate hikes over the next year or so. The Dow Jones industrial average gained 240 points shortly after the text of the speech was posted online at noon. The blue-chip stock index closed up by 617 points, or 2.5 percent, at 25,366. The S&P 500 rose 2.3 percent and the tech-heavy Nasdaq composite closed nearly 3 percent higher. 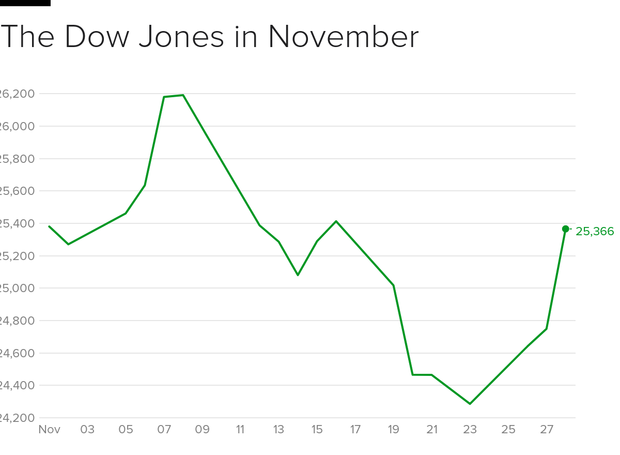 Powell also spoke reassuringly about stocks, which have tumbled from their record highs this summer, with big growth stocks like Apple and Amazon down 20 percent and more. “From the financial stability perspective… we do not see dangerous excesses in the stock market,” he said Wednesday.

The Fed cut its key interest rate to near zero starting in 2008 to boost economic growth in the wake of the worst economic slowdown since the Great Depression. It started to modestly raise rates in 2015 by a quarter of a percentage point and then in earnest since 2016.

The most recent hikes have drawn the ire of President Donald Trump, who has repeatedly slammed the man he named last year to chair the Fed for apparently undermining Mr. Trump’s economic policy.

“I think the Fed is a much bigger problem than China,” Mr. Trump told the Washington Post on Tuesday, adding that he is “not even a little bit happy [with Powell]. I’m not being accommodated by the Fed. I’m not happy with the Fed. They’re making a mistake.”

The Fed’s benchmark interest rate affects the cost of borrowing for consumers and for businesses throughout the economy, with high interest rates working to slow economic growth and therefore inflation. The current target rate is between 2 percent and 2.25 percent. That’s low by historical standards, but economists have not been able to agree on what the appropriate neutral rate is.

“The markets are latching on to two words in the Jay Powell speech,” Peter Boockvar, chief investment officer at Bleakley Advisory Group, said in a note. “We know that no one really knows what the neutral rate really is, but ‘just below’ is different than what he said in October, when he said ‘we’re a long way from neutral at this point, probably.'”

Some economists cautioned that investors may have been too eager to interpret Powell’s words.

“The broad range of estimates of neutral in the September forecasts was 2.5-to-3.5 percent, and the target range for the funds rate now is 2.0-to-2.25 percent. So the top of the target range is only one [quarter-percentage-point] hike away from the bottom end of the range, but it remains three hikes from the middle of the range and five from the top,” said Ian Shepherdson, chief economist of Pantheon Macroeconomics.

The Fed is widely expected to raise the rate once more in December and about three more times next year.