“Louse Eleven”: Helena Humane Society finds some of the worst case of dog lice ever seen

HELENA – The Lewis and Clark Humane Society (LCHS) says the 11 new arrivals at the shelter are some of the worst cases of dog lice they’ve ever seen.

Nicknamed “The Louse Eleven”, the Shih Tzu-Chihuahua crosses need significant care to get them healthy again.

On Tuesday, the humane society was contacted by Lewis and Clark County Animal Control. The officer had 11 dogs that were being surrendered and in need of help.

Staff quickly got to work preparing the shelter to receive the animals, but never imagined they’d arrive in such dire conditions.

“Unfortunately all of the animals are not in great shape,” said Kelsee Dalton Watts, the nonprofit’s executive director. “They’re matted and the biggest concern is that they’re covered in dog lice. They are emaciated, they need food they need quality care. They need medical treatment.”

The dog lice is so bad, many of the animals appear to be dappled because of the number of parasites.

“It takes a while for it to get as bad as these dogs have it,” explained Dalton Watts. “They’re completely infested, their skin is crawling, they’re very uncomfortable and they’re very itchy.”

In extreme cases like these, dog lice can cause anemia which can be fatal.

Staff’s first step was getting the Louse Eleven quarantined, providing food and water and beginning to remove the lice. 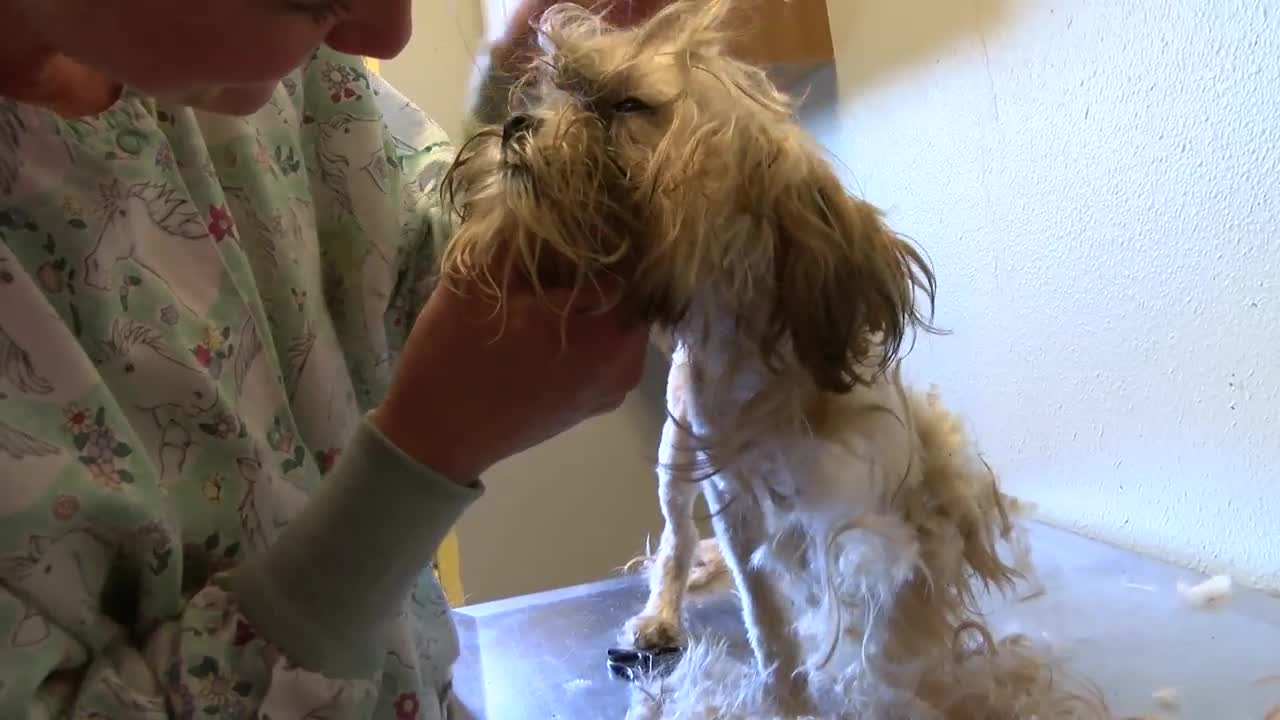 On Thursday, the dogs were shaved and bathed to provide some relief.

One of the smallest dogs is a male called Lewis, named after the American explorer, Meriweather Lewis.

As the filthy fur fell away, the pup began to perk up and show interest in his surroundings.

Rebecca Howard, dog program coordinator, then swept the young pup to a bath to help remove as much of the lice as possible. 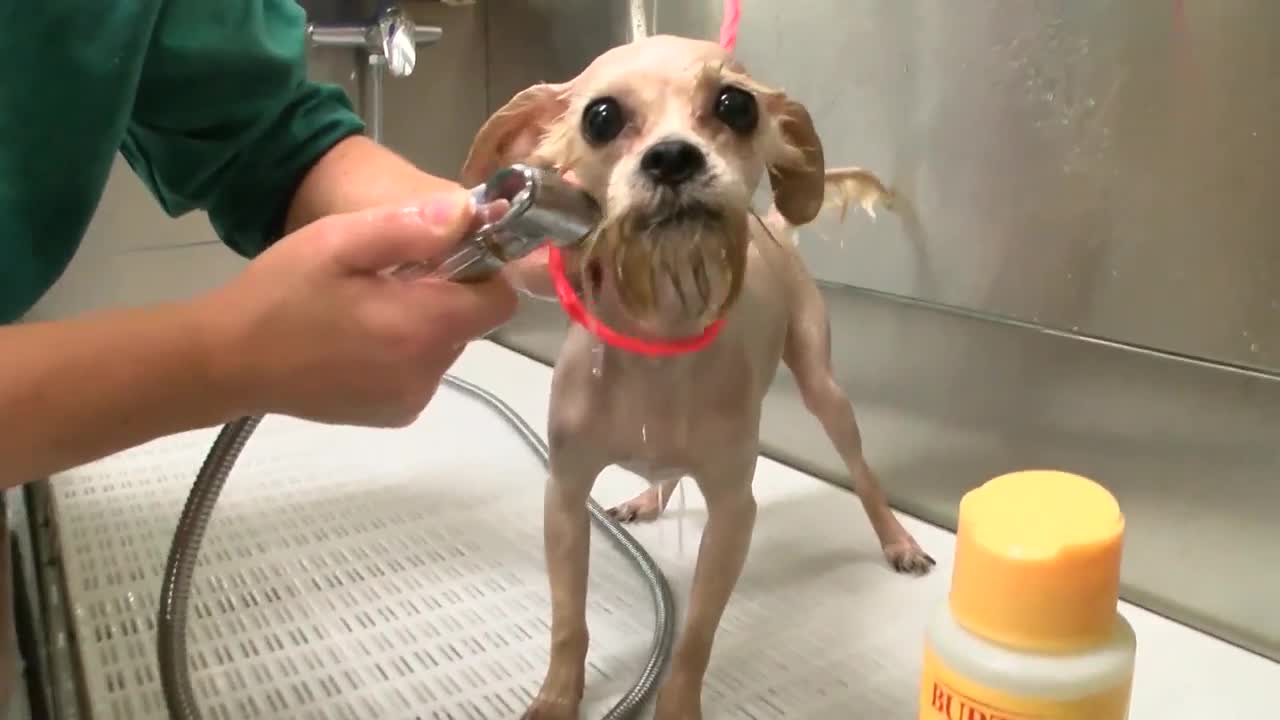 By the time his bath was finished, Lewis was acting much more like a dog and basket in the petting he was receiving.

In two weeks, the dogs will have to go through the process all over again for their second round of delousing.

“At this point, the lice are dying and they’re coming off. The dogs should start to feel better here soon. We’re headed in the right direction, but it’s definitely a slow process,” said Dalton Watts.

Due to the lice, the dogs will be in quarantine until the parasites are killed and will be housed at the humane society for at least a month.

Dalton Watts says she’s proud of the hard work and long days the employees have put in to help these animals.

“Our staff at the humane society are incredible. Lice can make your skin crawl and they’re still taking them into their arms, kissing their faces and loving these dogs,” said Dalton Watts. “They have tears in their eyes because they feel for these dogs so much.” 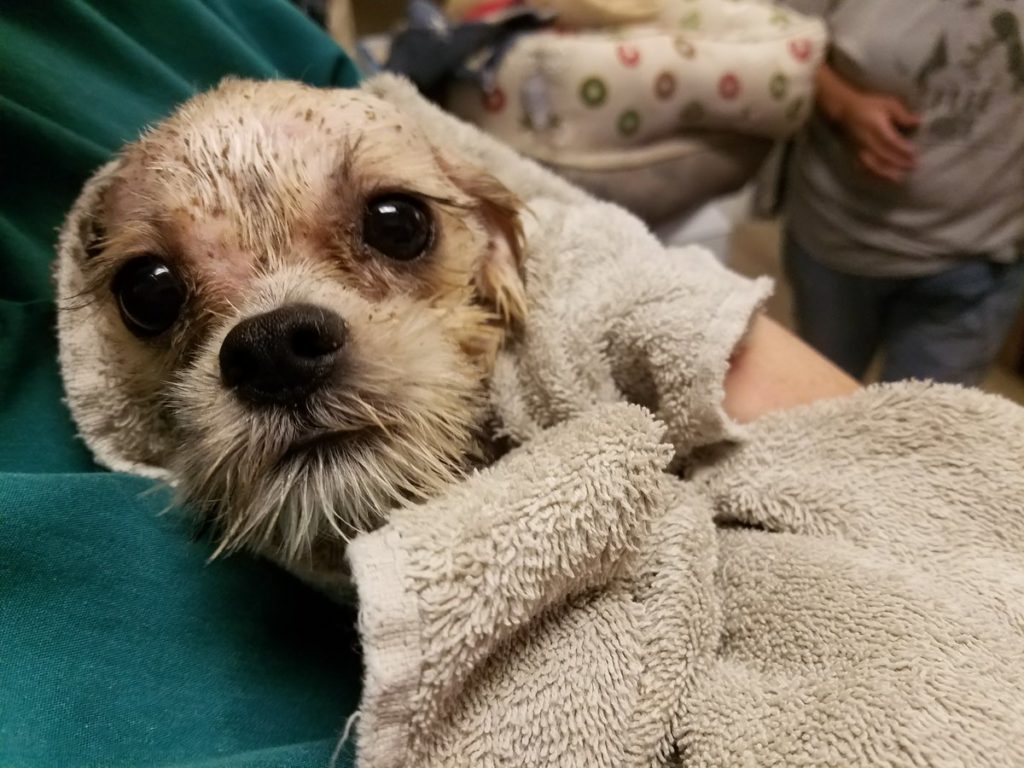 The Louse Eleven are just the newest residents of the shelter and Dalton Watts says her staff give every animal that comes into their care just as much love and compassion.

As of Thursday, the Lewis and Clark Humane Society has more than 100 animals under its care.

With the 11 new additions, the shelter is currently looking for more volunteers to help learn the shelter in the mornings.

More information about the shelter and how to support the animals they serve can be found on their website here.