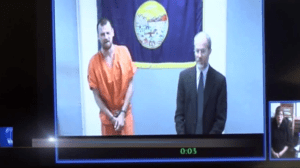 MISSOULA – A man who buried a then five-month-old baby alive last year near Lolo Hot Springs pleaded no contest to a felony charge of assault on a minor as well as guilty to other felony counts on Feb. 6, as part of a plea agreement with county prosecutors.

Details of that plea deal have come out in the official filing of the document in district court.

All of Francis Crowley’s felony charges are a result of an incident where he left a five-month-old baby in the woods near Lolo Hot Springs after crashing his vehicle.

Crowley admitted to police that he was high on a combination of meth and bath salts at the time.

Law enforcement was able to find the child buried under small sticks near the crash scene after an extensive search of the woods.

County prosecutors will recommend that Crowley receive 10 years for each of the felony counts, equaling a total of 30 years in Montana State Prison with 10 years suspended.

As part of the plea agreement, Crowley will also have one count of endangering the welfare of a child dismissed.

Crowley will also have to register as violent offender. His sentencing is scheduled for March 12.