According to the Carter County Sheriff’s Office, the military had to explode some of the devices in the Hammond area.

UPDATE – The Carter County sheriff has confirmed the crash that shut down a section of Highway 212 between Broadus and Alzada on Monday morning involved three semi trucks, one of which was carrying what he called “military projectiles.”

Kittelmann said two semi trucks collided and a third semi crashed into them. The third semi went into a ditch.

No injuries were reported.

The Carter County Sheriff’s Office and Montana Highway Patrol will keep the nearly 60-mile stretch of highway closed until the accident scene is cleared.

Kittelmann said the Air Force will assist in clearing the military projectiles.

After those are taken from the scene, wreckers will remove the semi trucks. The sheriff said he was unsure how long the removal and cleanup would take.

BROADUS – Highway 212 between Broadus and Alzada has been closed.

The Powder River County Sheriff’s Office states barricades have been placed to keep motorists out of the area and tickets are being issued for those who run the barricades.

“212 between Broadus and Alzada is CLOSED,” the agency states on Facebook. “We do not have any firm timeline for the road opening, but we do expect the clean up to last all morning and into the afternoon. Tickets are being written for those running the barricades, so please find an alternate route or postpone your travel plans. Thank you for your cooperation.”

According to the Montana Highway Patrol, the closure is due to a crash involving several commercial vehicles, including one that was carrying explosives.

The patrol’s website reports an injury crash on Highway 212 at mile marker 106 was received by the agency at 914 p.m. Sunday and dispatched at 7:05 a.m. Monday. 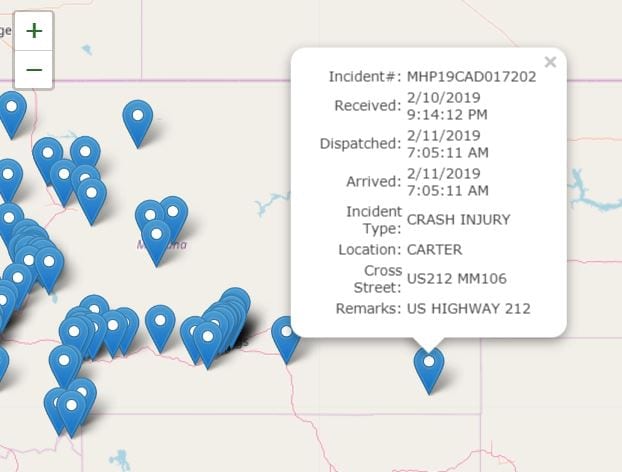 The Montana Department of Transportation website reports a semi and two trucks was reported at milepost 107 at 8:56 p.m. Sunday. The highway is closed in both directions from Broadus to the Wyoming state line, the agency states. 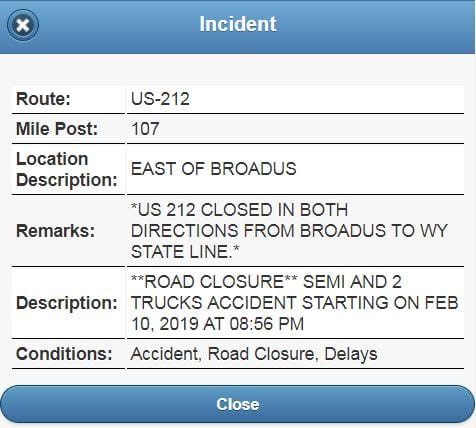