Daines, Tester announce guests for State of the Union

Daines announced last week that he will bring Jodi Moore, wife of slain Broadwater County Deputy Mason Moore. Moore was shot and killed on duty in May 2017. 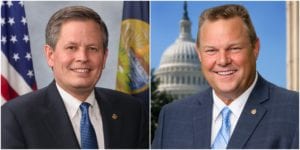 Since her husband’s death, Jodi has created the Mason Moore Foundation, which creates grants to pay for equipment law officers or agencies might not be able to afford.

She also recently spoke on a proposed bill that would rename a portion of Highway 287 to the Mason Moore Memorial Highway.

Tester has announced that Briana Lamb of Missoula, a known advocate for missing and murdered indigenous women, will be his guest at the speech.

Lamb is currently working with the senator’s office on bringing more awareness to the missing and murdered indigenous women epidemic.

Tester’s office said in a news release that Lamb was a driving force for the recent Senate Indian Affairs Committee hearing.

The State of the Union is scheduled to begin at 7 p.m. MDT on Tuesday.