Electric airplanes could be just over the horizon 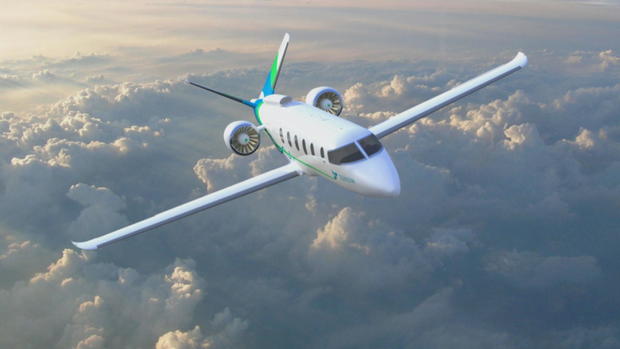 Electric cars are already here. Now, companies are looking to move the technology into another space: airplanes.

Last month, the company Zunum Aero took a big leap forward toward making a viable electric airplane when the charter flight firm JetSuite said it was purchasing up to 100 of Zunum’s still-to-be completed aircraft by 2022. CBS News’ Dana Jacobson went to Zunum’s headquarters to see how the company, best positioned to make it faster, cheaper and greener to fly, plans to do it.

Flying over the Pacific Northwest, Matt Knapp sees nothing but possibilities just over the horizon. Knapp co-founded Zunum Aero along with fellow aerospace engineer Ashish Kumar. The company is racing to build the first-ever electric propulsion airplane for regional travel.

What do they envision? A 10-15 seat aircraft that’s inexpensive to fly and makes you look like a "world class business jet owner."

The tech startup began not in anyone’s garage, but on the playground where their wives and children met five years ago.

"He had no idea what he was getting himself into," Knapp joked, referring to his now-colleague Kumar.

Zunum’s lofty ambition is to rewrite aviation history. Since 1980, government deregulation has consolidated the airline industry into a network of major hubs, all but grounding short-haul flights. Zunum wants to change that.

"From 1980 up through 2010, the airlines went from 20 to 80 seats. You got to fill all those seats, you need a big runway, it makes lots of noise and suddenly you have a lot few airports with service," Knapp said. "There are over 13,000 airports in this country and well over 4,000 of those are currently set up to allow commercial service of the type we’re talking. … There’s all these options and they’re sitting there, funded and we just need to be using them." 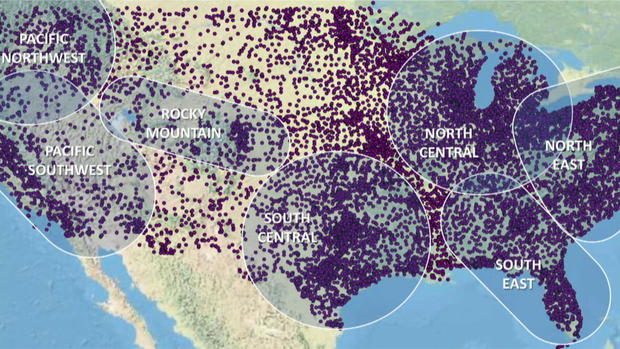 Map of regional airports across the U.S. that could be better utilized by Zunum Aero’s electric planes. (ZUNUM AERO)

Zunum is designing its plane to take advantage of those secondary regional airports under 1,000 miles apart, a perfect range for routes like San Francisco to Los Angeles, Kansas City to Oklahoma City, Atlanta to New Orleans, or New York to Boston. It could also make the trips much faster.

"If you were to take a sub-thousand-mile trip today by air you would probably spend three quarters of that time actually on the ground, driving to the hub, security, baggage belts, check-in and sitting on the tarmac, taxiing, waiting to take off. Right? So today you probably budget five hours leaving home to get to a meeting in the other city where we could say drop that time by half," Kumar said.

He said not relying on jet fuel will cut emissions on average by 80 percent and slash the price of a ticket which right now costs several hundred dollars.

"Our estimates would put it at about half or a quarter of that. We don’t set prices, the airline sets prices, but we think from a cost standpoint we can take that down by a factor of two," Kumar said.

Zunum estimates a seat would cost eight cents per passenger mile, meaning New York to Boston could be as cheap as $25 each way.

"This is probably the most exciting period in aviation that I have personally gone through," said Graham Warwick, the technology managing editor at Aviation Week. He’s been covering the aircraft industry for nearly 50 years.

Warwick says Zunum is on the path to meeting its goals.

"Technically, their timeline, which I think is certification by 2020, looks doable," he said. "The issue that they face is can the regulatory timeline match the technical development timeline."

After years of delay, electric propulsion is now on the FAA’s radar. The agency is currently writing new standards to certify this.

Last month, Zunum let CBS News see the first round of tests on the electric and power system that will eventually propel the aircraft. The company hopes to test their system in the air sometime in 2019.

"Five years ago it would have looked like pie in the sky. But the push on the car side to get to a reasonable range for a car with 300, 400 miles on a single charge drove the battery technology to a point where it becomes feasible to do a small aircraft with battery power," Warwick said.

Zunum is designing its plane as a hybrid, battery-powered with a gas turbine as a backup.

"We basically have a Tesla on each wing," Knapp said.

Zunum is betting that between the replacement of smaller conventional planes and more people choosing to fly instead of drive, electric propulsion could generate a new $3 trillion industry.