Former White House chef Sam Kass is on a mission to help Americans eat better. Kass served as a personal chef to the Obama family and senior adviser for nutrition policy in the administration.

While in the White House, Kass led first lady Michelle Obama’s Let’s Movecampaign to combat childhood obesity, and worked to set new, healthier standards for school lunches (rules which have since been loosened by the Trump administration).

Kass also helped persuade Walmart to lower the price of its fruits and vegetables, and cut sugar and sodium content from its packaged foods.

His new cookbook is called "Eat a Little Better: Great Flavor, Good Health, Better World" (Clarkson Potter), in which he writes about small changes that can help improve our health and the planet — from keeping healthier foods close at hand and making more sustainable food choices.

Appearing on "CBS This Morning" on Monday, Kass was asked why so many people fail at diets.

"We’re told there’s this perfect diet, there’s this right way to eat, it’s very aspirational," he said. "And the reality is, most people don’t eat that way, even people who are espousing these perfect diets that are utopic. We need to focus on making progress in little steps that people can put into their daily lives that can actually have a big impact on their family’s health and the environment. And if you get too big, go for the stars, most people fail, and they get demoralized. 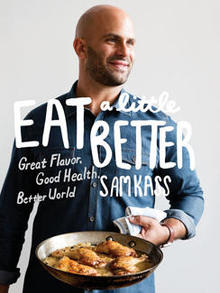 "The vast majority of Americans are trying to eat better but they’re failing and they’re failing because we don’t actually give strategies to implement these changes in our daily lives. So everybody ends up falling short and then ends up throwing their hands up and giving up."

"As someone who repeatedly fails on this front, what little steps can I take?" asked co-host John Dickerson.

"The first thing that people can do is try to set themselves up for success. Right now we buy a bunch of food. We put it around us in our homes and then we end up making bad choices. You eat what you see. You want to put things on your counter, in your fridge, that you’re actually trying to eat, and put the treats on the top shelf, so when you want one, you still have it, but [when] you really want it — not, ‘I saw that cookie, I’m gonna eat that cookie!’"

"That’s what happened with the Obamas; when you first met Michelle Obama, you helped clean out their pantry," said co-host Norah O’Donnell.

"Yep. And it makes a huge difference. ‘Cause now the kids are running through the kitchen and instead of grabbing a bag of chips, they’re grabbing some grapes because they’re just getting what’s around them."

Kass said good nutrition for young people is a foundation of a thriving economy and health care system, and was concerned by Republican proposals to cut school lunch and food stampsprograms.

"The fact of the matter is, moms and families and parents, they want good food for their kids in schools. I think the program needs more money, first and foremost. One of the things that’s most concerning now right now is proposals from the GOP to roll back SNAP, the nutrition assistance program, kicking millions of honorable Americans off of food stamps. That’s very concerning."

Without programs to support good nutrition, "we’re going to see costs continue to skyrocket in the decades to come," he said.

"You’re a new father; how has that helped change how you look at food and feed your kid?" asked co-host Bianna Golodryga. "You want them to eat healthy, but at times you just want them to eat!"

"Sometimes they just gotta eat something!" he laughed. "It’s been one of the great joys of my life. It really brings it close to home. You see what you’re feeding your kids shapes what they’re going to like for their whole lives, and if they’re getting really sweet foods from the outset, they’re going to want from age two, three, seven and beyond. Getting kids off to the right start is the most important thing we can do as a society."

Kass was asked to describe his experience as White House chef during the Obama administration. "First, it’s the greatest honor of my life and I think will always be. It was intense, you know, because of all the policy work and Let’s Move, working for the first lady, dinner was like, I felt often like a single parent – ‘Oh, my God, I gotta have dinner on the table, I got 30 minutes!’

"The thing that struck me most, no matter where he was or where she was, they had dinner as a family, unless he was overseas or in California. They ate as a family every night, and he left everything that he was dealing with at the door."