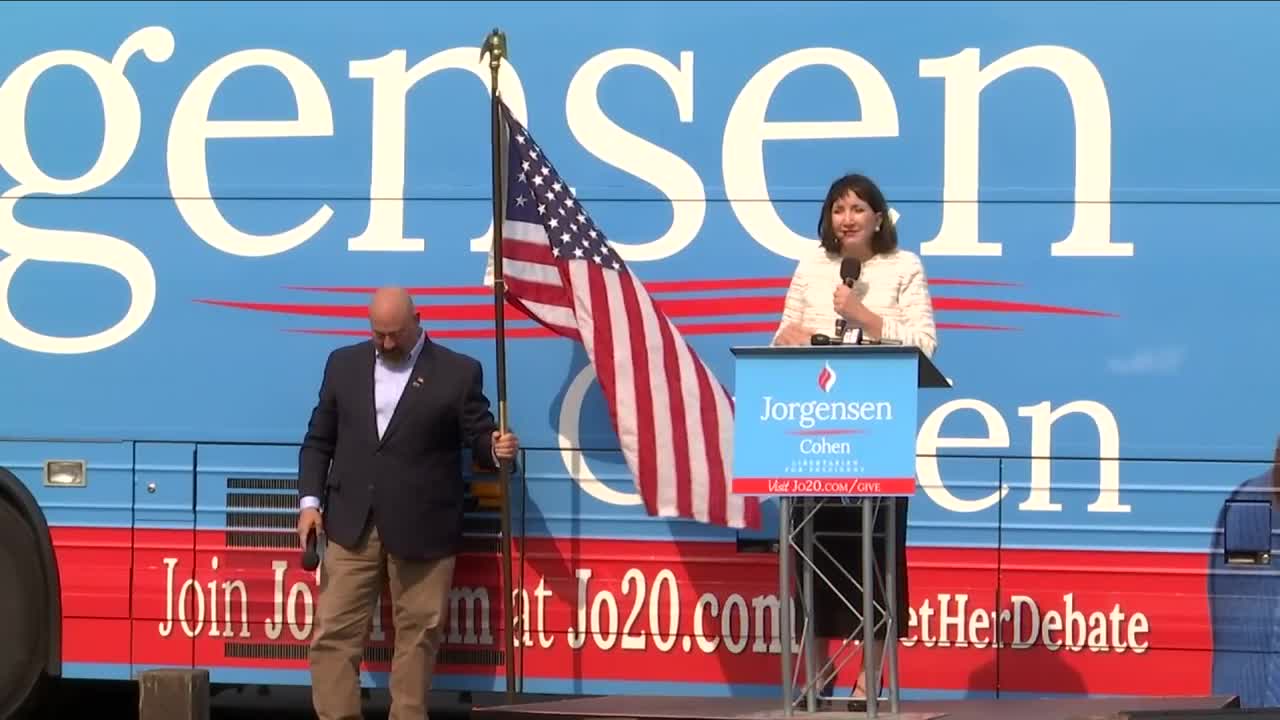 In her remarks, Jorgensen spoke about cutting military spending and shifting its focus towards home defense. She said her first action as president would be to bring American troops home from the Middle East.

“I’m going to turn America into one giant Switzerland: armed and neutral. Our military must be trained to defend our shores, but we have to stop meddling around the world and make peace with our world neighbors," Jorgensen said.

The U.S. Military had a 2019 budget worth $686 billion, according to the Department of Defense.

Jorgensen said she'd defund federal policing including in the Drug Enforcement Agency and Department of Homeland Security. She cited DEA raids of state-approved medical marijuana dispensaries and recent sightings of unmarked federal police officers in American cities in her reasoning.

“Long gone is the local, friendly police officer who walks the beat and knows everybody by name. Instead, we’ve had the federal government import nameless, faceless SWAT teams that make our streets feel to many Americans like combatants in their own neighborhoods," Jorgensen said.

Jorgensen said she would end the practice of local police receiving equipment from the military through the 1033 program.

Jorgensen said the federal government's war on drugs and mandatory minimum prison sentences contribute too much to America's incarceration rates. She said she would decriminalize all drugs at the federal level and encourage states to treat them as a healthcare issue.

As well, Jorgensen is against the practice of no-knock raids by police.

Jorgensen compared the war on drugs to American alcohol prohibition in the 1920s. She claimed American organized crime and gang activity would decrease if their market is lost due to decriminalization.

On healthcare, Jorgensen said she would like to see a free market system that's not dominated by big insurance companies. She's not in favor of a "medicare for all" type of system that is ran top-down from the federal government.

She said insurance companies are built to cover unexpected costs which keep premiums low. Jorgensen argued that the current healthcare system pays for everything and removes the incentive for providers to keep prices low.

Instead, Jorgensen said she wants a healthcare system similar to Singapore. The country offers a variety of government-subsidized insurance policies and citizens can choose to add more comprehensive private policies if they choose, according to The Commonwealth Fund.

Jorgensen compared her ideal healthcare system to the one currently seen in America's laser eye surgery and cosmetic surgery industries.

"If you look at the only two somewhat free-market systems in our health care, which would be lasik surgery and cosmetic surgery, they’re somewhat free market because people have to pay with their own money. Prices have gone down dramatically and quality has gone up. I would like to see the rest of health care go under such a system," Jorgensen said.

The next stop for the campaign is Rapid City, South Dakota.