BILLINGS- You might call the interstate system a lifeline for Montana.

From west to east, Interstate 90 pumps millions of dollars of commerce into the state, and Montanans travel it for business and pleasure. But in term of the drug trade, this major arterial road also leaves Montana exposed.

“There is a significant drug problem in Montana,” said Sgt. Jim Sanderson of the Montana Highway Patrol. “We know that most all meth comes from Mexico.”

Sanderson said meth, heroin, and marijuana are some of the most common drugs coming into Montana by way of the highways, directly from Mexican drug cartels. He says over the years, it’s become a trafficking epidemic that’s forcing law enforcement to pay attention in ways they never have before.

On the interstate, the Montana Highway Patrol acts as the first line of defense in the fight against Montana’s meth epidemic. Because that’s where traffickers are driving the drugs in.

“So we are focusing on I-90, I-94 and I-15,” said Sanderson, who heads up the Montana Highway Patrol criminal interdiction team.

“It was successful well beyond what we felt it would be,” said Sanderson. “To put it in scope, the teams themselves-  and this is six team members- seized just over 57 pounds of meth within the first year.”

A pound of meth in Montana is significant, according to Sanderson, because a standard user might use a tenth or a quarter of a gram, meaning traffickers are gaining a significant profit off the demand for it.

“We have seized vehicles that we believe came directly out of Mexico,” said Sanderson. 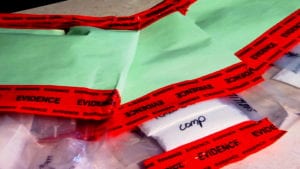 Most recently, the Montana Highway Patrol interdiction team announced details from a major drug seizure in eastern Montana, in a massive drug case was being investigated and adjudicated for two years.

The bust happened in 2017 in Custer County, which was one of the largest seizures in Montana history, according to the Department of Justice. On Nov. 8, 2017, the interdiction team stopped a Nissan passenger car. A trooper and K-9 determined there were drugs in the car and through the course of the traffic stop, 29 pounds of meth and six pounds of marijuana were pulled off the streets. Troopers discovered the car was en route to North Dakota from California.

While that case was a large one for the criminal interdiction team, Sanderson said many times troopers are working with local drug task force officers to pin down traffickers and pull them over with large loads and sometimes small ones.

“Even if we can’t put a bunch of small cases together or completely identify an entire group, we can at the very least hurt them where it hurts the most, and that’s by taking their product off the road,” he said.

What is the drug route?

Drugs are transported in cars, on bus lines and even in the U.S. mail system.

Meth is ordered from a supplier in Montana from a drug cartel out of Mexico, and then the distribution begins. The product is then most often driven through a border crossing and into a southern state.

Sanderson said the distribution usually goes one of two ways. The first is usually from Arizona to Salt Lake City or Denver, then directly to Montana’s eastern side into Billings. Or from California along the west coast through Seattle, the Tri-Cities, Spokane and along Interstate 90 through Montana where the distribution often either ends, heads farther east or goes north to Canada.

“Drugs are coming into Montana. It’s coming from all over the place,” said Sanderson.

So, he said, the interdiction team stations themselves on both the western and eastern sides of the state, patrolling and working with local officers to stop a load in its tracks.

“So we can conduct targeted enforcement based off of information that they can provide us that they are drumming up through days, weeks, months, sometimes years of investigative work from the ground up,” said Sanderson. “And then we can capitalize on that information and take down a significant load of drugs.”

While the interdiction team is making tangible progress in their work, Sanderson said they plan to expand with more officers in the coming months and take more drugs off the streets.

One day at a time

On a brisk fall day, Montana Highway Patrol Trooper Darvin Mees sets out on shift. He starts by checking speeds on Interstate 90 from Laurel to Lockwood. 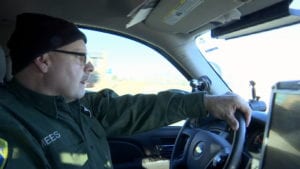 “My responsibilities are those of any other trooper out here. Crashes, complaints, DUIs,” he said.

He’s been a trooper with the patrol for 18 years in the Billings area and is a supplement of the criminal interdiction team because of his canine partner.

“In addition though, I have this tool that is used for drug interdiction,” he said.

At this point, the criminal interdiction team doesn’t use K-9 officers, so Mees is often called upon to join in on a traffic stop where drugs are suspected in the car.

“You’ll notice that she will really get fired up,” Mees says.

His relationship with Saar is like many K-9 handlers. They bond with a game of ball or fetch.  During a shift, they work. Unlike some police dogs, Saar is vocal, something Mees enjoys. When Mees switches on his police lights to engage in a traffic stop or speeds up his patrol cruiser, Saar gets up from her backseat compartment and starts barking. She gets excited, said Mees.

“In her mind, she is always hoping that she is going to get out and do a little bit of work.”

This year alone, the duo made over 60 drug seizures. And on just an ordinary Wednesday, Mees is about to do one more. A mere two hours into his shift, Mees spots a car in Billings with a shattered windshield, so he opts to pull the vehicle over because of an obstructed view.

The vehicle ends up pulling over in the Motel 6 parking lot in Billings and not long after its stopped, another unmarked Montana Highway Patrol car arrives as well as an officer from the Billings Police Department.

It only took a quick glance in the windows, and Mees notices drug paraphernalia is scattered throughout this car.

“There were some needles, some Q-tips and cotton balls, filters, foil with burn marks, lots of foil, brand new foil,” he said. “There is a couple of scales in there, I didn’t find a bunch of new bags, but there were two bags with heroin.”

Inside the car, Mees and the other officers found seven grams of meth, a small baggie of heroin, something that is referred to on the streets as chocolate.

The drugs are likely from a Mexican drug cartel and sent to Montana to be distributed to low-level dealers, according to Mees.

Mees was told there was an altercation at this same location, with the same group of people just hours before.

Officers had recognized this car before with evidence tape still stuck the vehicle. With obvious drug paraphernalia in the car and signs of intention to distribute, one male occupant was arrested for warrants, but the other two were not.

In this case, as many Montana law enforcement officers face, Mees was forced with a tough decision on this day. He was informed earlier in his shift that the Yellowstone County jail was full, only violent offenders allowed, which means the drugs are seized and the occupants go free.

“The next best thing is to get them a court date, get them in front of a judge at some point in the near future,” said Mees. “It’s not something that just takes place in the shadows you know in our community, its something that’s going on any hour of the day really.”

“All you have to do is really take a look around, and you’ll be able to see how that is affecting your community,” said Sanderson.

But the solution has to be a collaborative effort, according to Sanderson.

“We completely understand that we are unable effectively combat drug abuse and substance abuse in Montana. That is a collective effort, but we are doing what we can on our part on the road,” said Sanderson.

In the second edition of this series, MTN News takes a deeper look into how local drug task forces are seeing first hand the special ways traffickers are trying to avert law enforcement. Those who specialize in investigating drug operations talk about how the meth epidemic has also plagued the city of Billings with violent crimes.