Woodstock at 50: In the words and music of those who were there 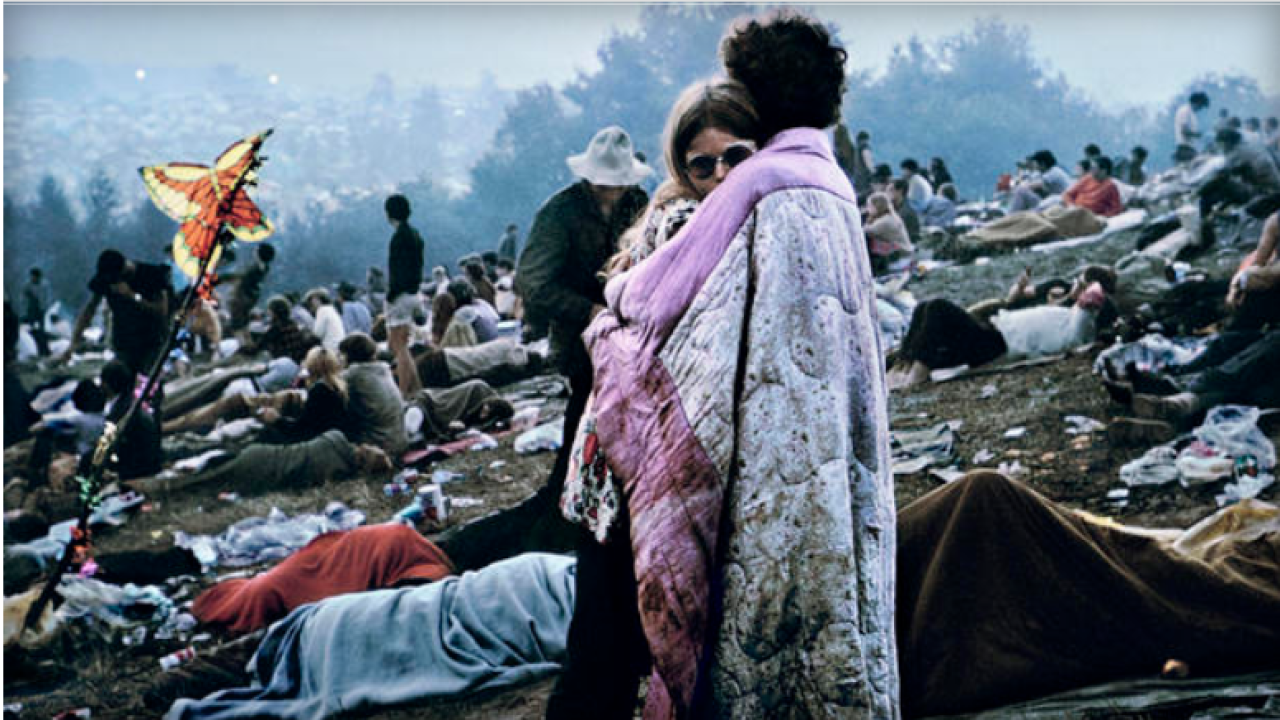 The photograph of Nick and Bobbi Ercoline, huddled under a blanket at the 1969 Woodstock festival, became famous as the cover of the live album.<br/><br/>© BURK UZZLE 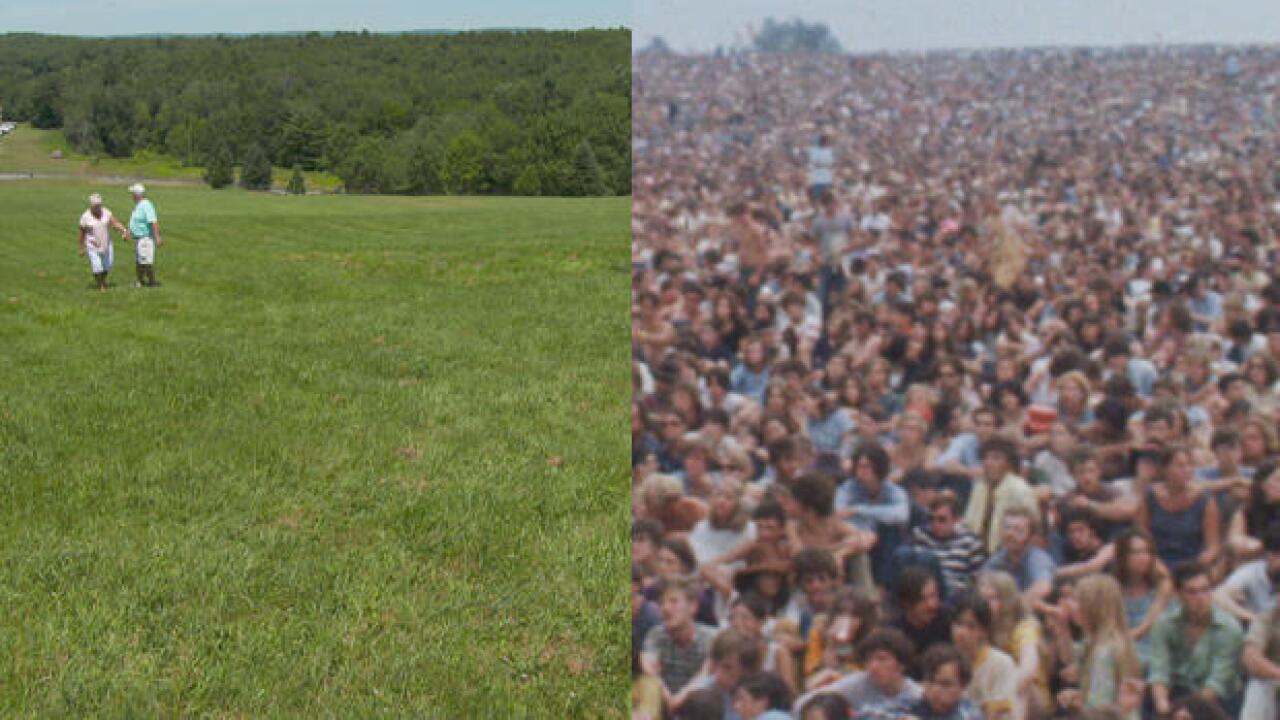 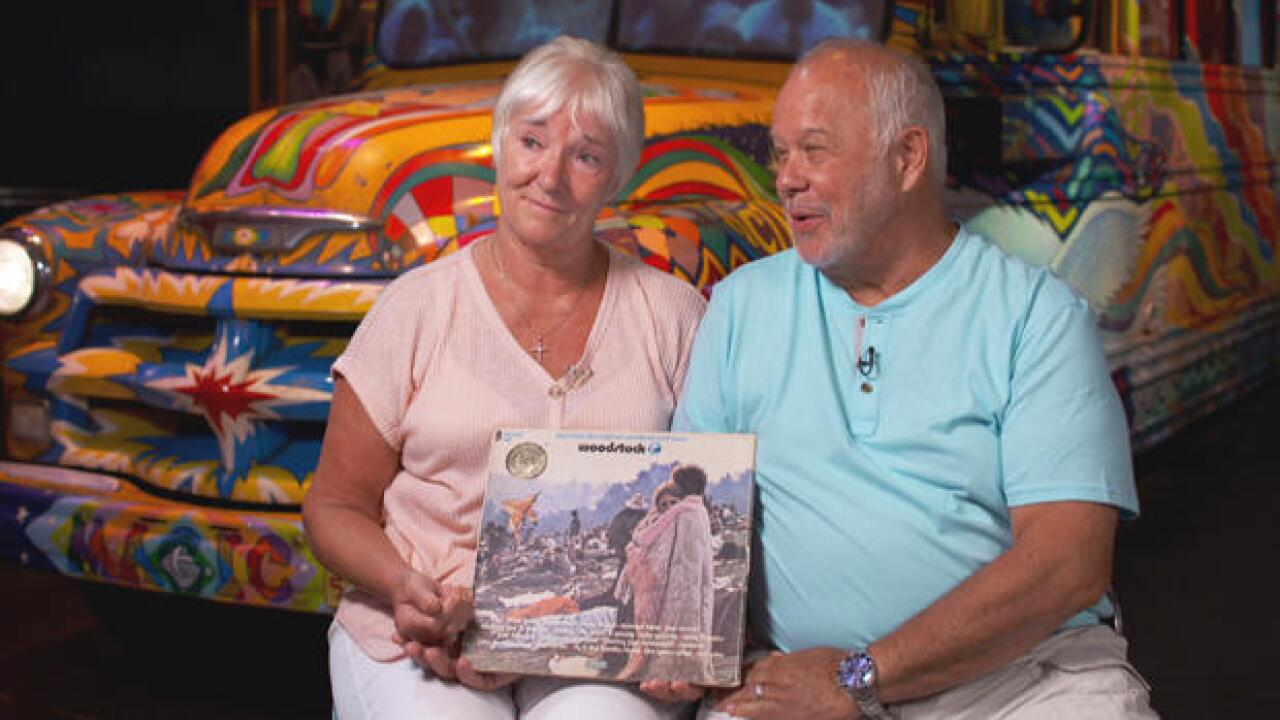 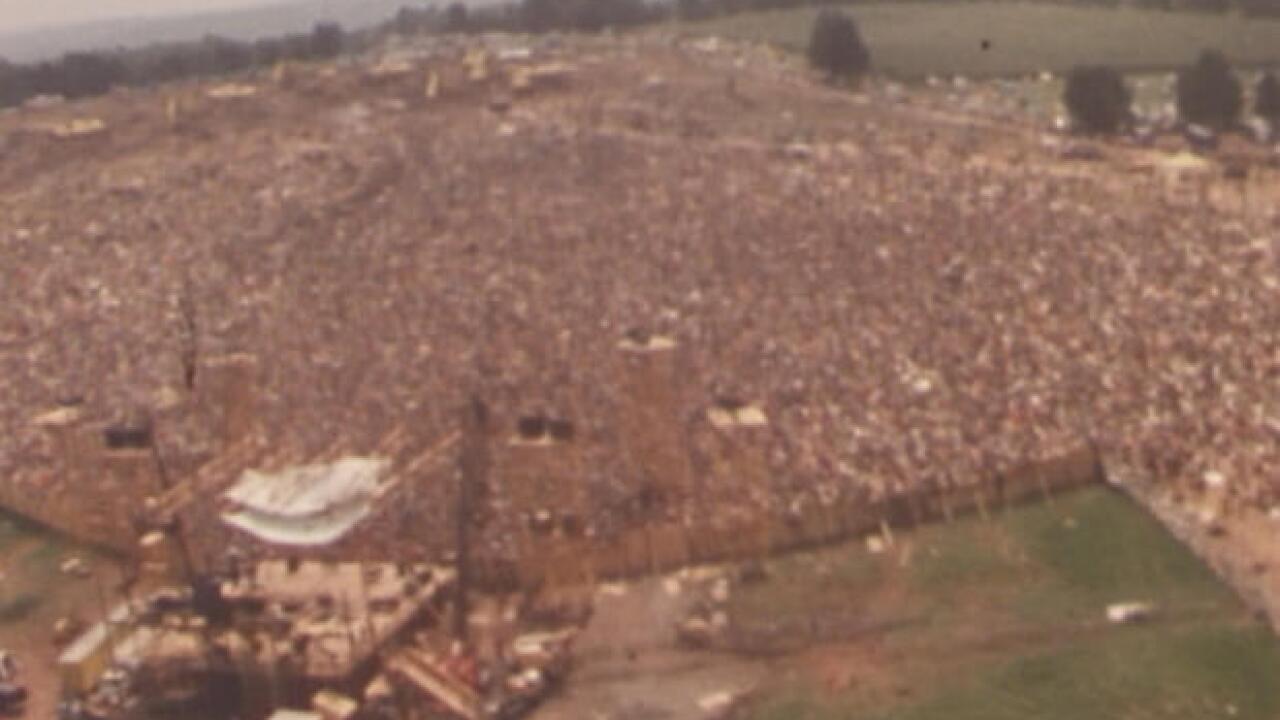 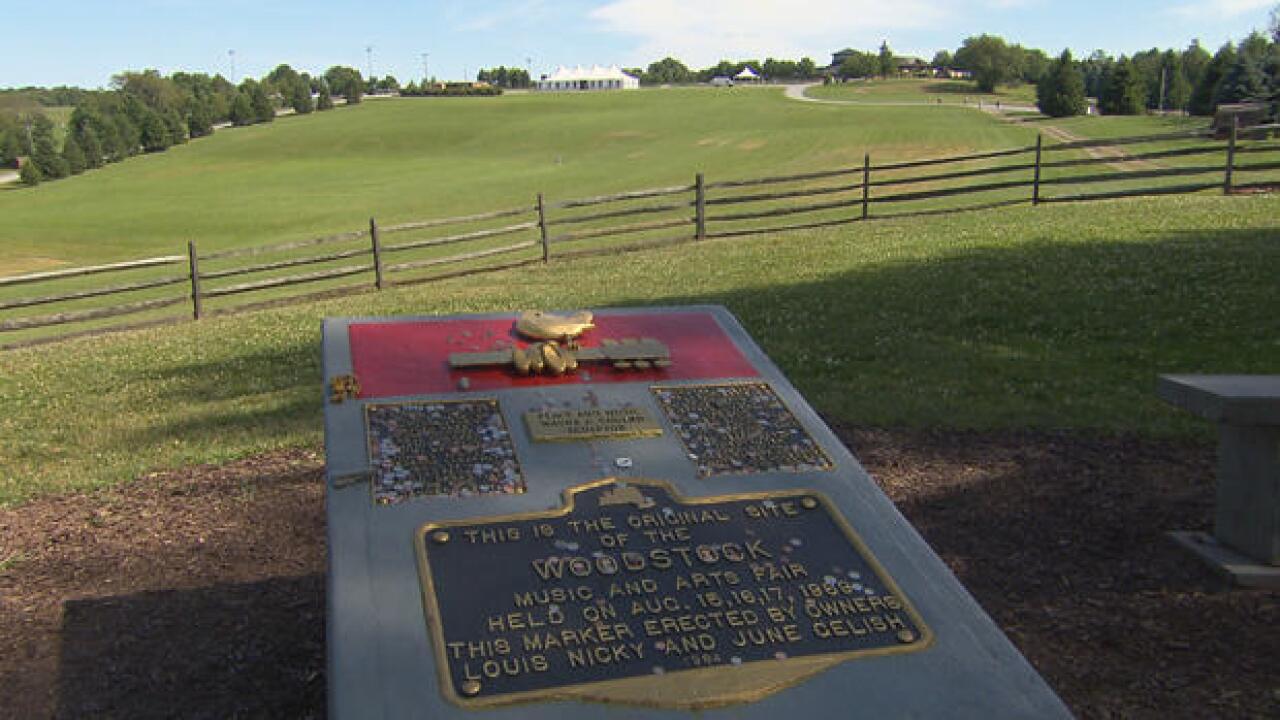 BETHEL, New York — It's been 50 years now since Nick and Bobbi Ercoline first walked on a particular hillside in Bethel, New York. "Brings me back to the time when I was 20 years old and falling in love with this beautiful woman here," Nick said.

They were not alone that first time – far from it. Half a million others were camping out with them on Max Yasgur's farm on that mid-August weekend in 1969. At the Woodstock Music and Art Fair – "Three days of peace and music," the poster promised – what no one counted on was torrential rainstorms that turned the site into a muddy mess, with food, water and bathrooms all hard to come by.

One festival-goer told a CBS News correspondent at the time, "I'd like to say that I think this whole scene is out of sight, this is a real groovy scene!"

Correspondent Jim Axelrod asked Nick and Bobbi, "All those people packed in so tightly, conditions that weren't ideal -- what was the vibe like right here?"

"We were all in it together," Bobbie replied.

They were all in it together, this Woodstock generation. A year after the assassinations of Martin Luther King Jr., and Bobby Kennedy, with the war in Vietnam raging, Woodstock was a counterbalance.

One young man told CBS News that day, "Once I got here and I felt the vibrations that these people are giving off, to see the sun come up with Jefferson Airplane was something, really something."

The festival succeeded despite the promoters' ragtag, chaotic efforts. So many people showed up, it became impossible to control them, or to police ticketed entrances. The festival was declared open and free to everyone.

Richie Havens opened the show Friday afternoon with the song "Freedom," while Jimi Hendrix ended it Monday morning with "The Star Spangled Banner."

In-between there were performances by Sha-Na-Na; Janis Joplin; Blood, Sweat & Tears; The Grateful Dead; and The Who, among others. And Woodstock put Joe Cocker on the map, with his own take on The Beatles' "With a Little Help From My Friends."

John Fogerty's Credence Clearwater Revival was one the hottest bands going when they played Woodstock. "We're going in by helicopter, we thought it was really fun," Fogerty told Axelrod.

As the chopper came over the rise, Fogerty realized this wasn't just a concert … this was history. "The awesomeness of it, the hugeness of it, it was scary," Fogerty said. "I just have never seen a gathering of people that big before."

Construction of the concert stage continued until the last minute. Time problems created chaos in planning and organization among the show's producers. Booked as headliners, and assigned the prime spot of 9 o'clock Saturday night, Credence Clearwater Revival didn't take the stage until 2:30 Sunday morning.

Fogerty recalled, "The lighting only carried out about two, three rows of people. And the rest was just black."

"So, you were playing to pitch black?" asked Axelrod.

"Yes! instead of the usual, 'Ha!' and all that kind of thing, there was just kind of no reaction! Eh, quickly I look down and I see a couple of rows of people, they were naked. And they were asleep! And way out there, like a quarter mile, I can't tell, you know, it's just black, but I see a lighter flicker. And I hear a guy's voice. And he says, 'Don't worry about it, John! We're with 'ya!'

"And so, I played in front of half a million people, I played the whole rest of my show for that guy!"

Wade Lawrence, curator of the Museum at Bethel Woods, took Axelrod to the spot where stage was in 1969. "It feels like sacred ground," said Axelrod.

"It is," Lawrence replied. "Carlos Santana came here 40 years after Woodstock, he stood right where we're standing and looked up the field, tears in his eyes, and he said, 'This is ground zero for peace and love.'"

CBS News reported at the time that security officers praised the "good manners" of the celebrants: "Excuse me," "I'm sorry" and 'Thank you" were terms of common usage between cops and kids.

There are plenty of stories about the bedlam that marked those three days. But half a century later, Lawrence said that's not the enduring meaning of Woodstock: "It became a rallying cry for young people who were disappointed with the way their government was treating them, disappointed with the progress of civil rights and an unpopular war in Vietnam.

"And Woodstock to them was a gathering of the tribes. It gave them optimism. It gave them that idea that we could change the world."

On August 18, 1969, CBS News' Richard O'Brien reported on the end of the festival: "And so, it's all over, except for the massive clean-up job that remains. The Woodstock Music and Art Fair, having done its thing, quietly closed its tent and steals away. "

The festival's anniversary has always provided a marker for that generation's legacy. "Sunday Morning" first took note on the 10th anniversary in 1979 with singer David Crosby, who told us, "It was the only time that I know in history that that many people got together in one place where there were not murders, rapes, robberies, burglaries taking place. Now, I want you to know, there really weren't any. It was a peculiarly peaceful scene. And this is talking, you know, statistics, not, you know, 'Hey, groovy, man.' It was for real.

Crosby's bandmate, Graham Nash, told Axelrod, "The truth is, if every person that have ever come up to me and said they were at Woodstock were really there, the planet would've tilted!"

Nash was 27 at Woodstock, and along with Stephen Stills and Neil Young, they were all a little nervous. They told the crowd that night, "This is the second time we've ever played in front of people, man. We're scared sh*tless!"

During their set they performed "Suite Judy Blue Eyes," with one acoustic guitar. "That's tricky stuff to do live, isn't it?" Axelrod said.

"Yep. Pretty good. Yeah. I was proud of it. A little loose. I mean, we're only sitting in front of half a million people! But I thought we did very well."

Now 77, Nash says the Woodstock generation did very well, too.

Axelrod asked, "When you look back now, the Woodstock generation, how did they do over the next 50 years?"

"I still believe what we believed then, as hippies. Right? I'm still a hippie! I mean, let's get real: The basic ideas are that love is better than hatred, that peace is much better than war, that we have to take care of our fellow human beings 'cause this is all we have. Those tenets that were established then are still relevant to me today."

In the storms that soaked the festival, John Fogerty found the perfect metaphor for a turbulent world.

Axelrod asked, "What did you see over your time at Woodstock that sparked the writing of 'Who'll Stop the Rain'?"

"I think the main thing is in the final verse," Fogerty said. "I'm talking about the crowd rushing together, trying to find shelter from the storm, meaning my generation. What was in my mind's eye really, to me, represented all of us, all over the world, or all over the universe."

Still the rain kept pourin'
Fallin' on my ears
And I wonder, still I wonder
Who'll stop the rain?

Woodstock's legacy is plain to see for Nick and Bobbi Ercoline – it's right there on the cover of the live record album. As Bobbi put it, "Peace among chaos."

Peace is that couple cuddling close under a blanket. "I think the picture is a reflection of hope," Bobbi said. "That no matter how bad or uncomfortable a situation may be, with love and kindness, there's always hope."

They ought to know; that couple is them.

Axelrod asked, "If I told those two people that day that 50 years later you'd be sitting here explaining that picture …?"

"But you know, we're not the couple on the cover of the Woodstock album," Bobbi said. "That could be any young couple that was there. Right now, we're Grammy and Poppa!"