Q2 Weather: Ready or not, the snow comes to Billings Friday night 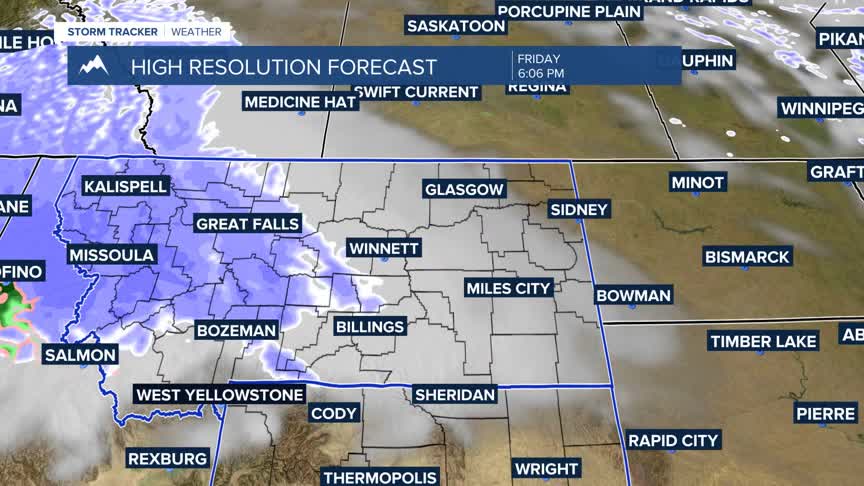 BILLINGS — The cloudy skies of this weekend's upcoming snowstorm are already starting to make their way into the Billings area. However, the temperatures are still holding fairly steady at 23 degrees, and the wind is northeast at 7 mph.

Around the rest of the state, the temps are mostly in the teens and 20s. The threat board is already starting to fill up again with the upcoming snowstorm watches, warnings and advisories.

Billings is now under a Winter Storm Warning for 6 to 10 inches of snow and blowing and drifting snow. And this will stay with us through noon Sunday.

Around the rest of the state, there are various amounts of snow expected, although the Beartooths could see as much as 10 to 18 inches of new snow.

The Doppler radar already shows the snow has started to Missoula and Great Falls and just now starting to push into Bozeman. The high-resolution forecast model shows the snow, will probably start making it into the Billings area around 6 p.m. Friday.

We expected the snow off and on throughout the night and into Saturday morning and the rest of the day Saturday, even on into Sunday morning. By Sunday afternoon, the storm will have come and gone.

It will be 25 degrees at 5:30 p.m. tonight, then we will continue to stay in the 20s throughout the night and into the morning. From there the temps should drop down to the teens by Saturday afternoon.

We will top out at 23 on Saturday, drop down to 16 degrees on Sunday and then rebound into the 20s to 40s the rest of next week with mostly sunny skies.

TONIGHT: Mostly cloudy with a 90% chance for snow showers overnight. Snow accumulations could be around 2 inches. Northeast winds 5 to 15 mph. Low 18 degrees.

SATURDAY: Mostly cloudy with a 100% chance for snow and blowing snow. Snow could be heavy at times in the morning and accumulations of around 6 inches are possible. North winds 10 to 20 mph. High 23 degrees.

SUNDAY: Mostly cloudy with a 20% chance for snow in the morning then sunny skies in the afternoon and cold. Northwest winds 5 to 15 mph. High 16 degrees.