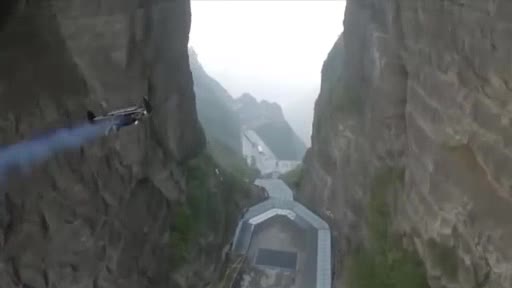 Frenchmen Fred Fugen and Vince Reffet jumped out of a helicopter in Zhangjiajie, Hunan Province before flying with carbon fiber wings powered by four reactors.

Excited crowds watched as the pair soared through the air, navigating around the area's mountainous terrain, and successfully flew through the natural archway "Heaven's Gate," also known as Tianmen Mountain.

Reffet described the experience as "a bit scary" as the pair flew quickly through the air and the hole in the mountain looked small from afar.

According to organizers, the equipment Fugen and Reffet wore can reach speeds of near 250 mph and is controlled by the human body and can change direction and perform loops