How to keep your pet safe on Halloween 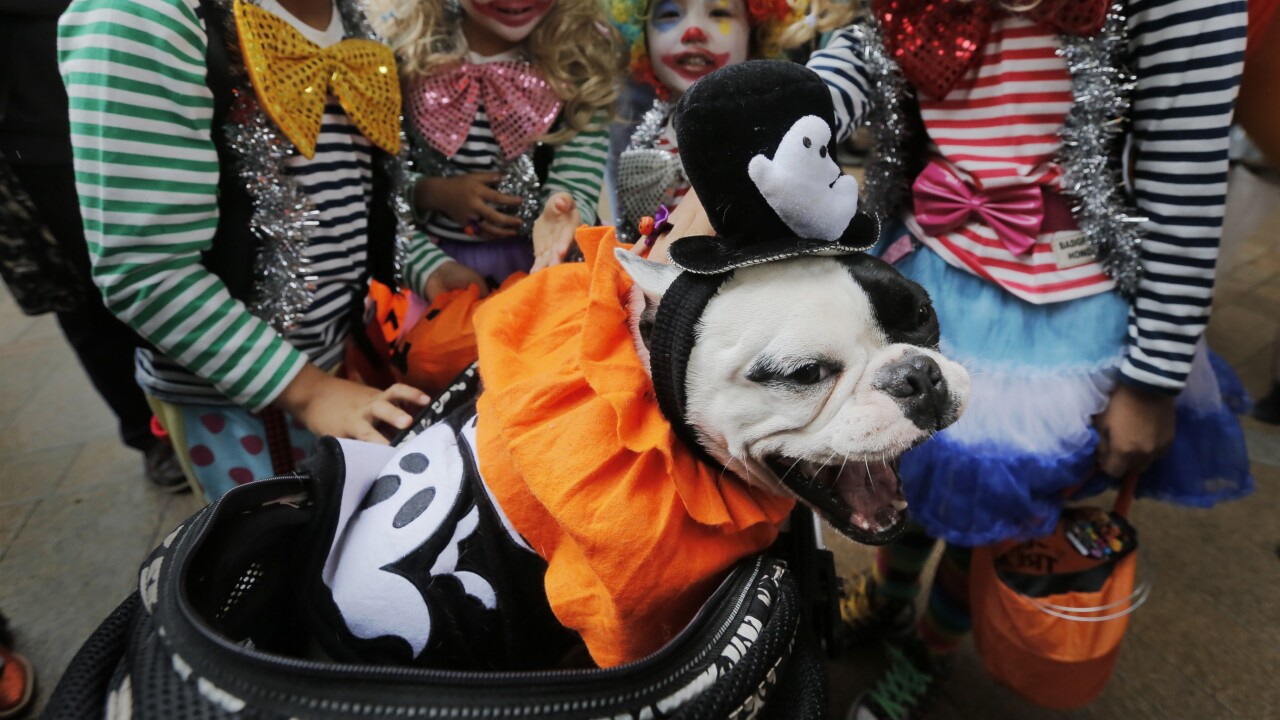 Halloween is here and while witches and ghouls are stirring up spookiness, there are scarier things out and about — at least, for your pets.

Here's some tips to help keep Fluffy and Fido safe while you're tricking and treating.

Lots of Halloween treats are toxic for pets, so make sure your sweets are stashed away and out of reach. According to the American Society for the Prevention of Cruelty to Animals, two candies to especially watch out for are chocolate and sugar-free treats. Chocolate, especially dark or baking chocolate, can be very dangerous for cats and dogs. In addition, sugar-free candies often contain xylitol, a sugar substitute, and can cause serious problems for your furry friends. If your pet does somehow get into the candy come Halloween, the ASPCA advises that you call your veterinarian or the organization's Poison Control Center at (888) 426-4435.

Halloween just isn't the same without a jack-o'-lantern. But while the carved pumpkin is festive decor, it's also a fire hazard if you have a pet around that could potentially knock it over. So be sure to keep an eye on open flames and keep them away from rambunctious pets. Also, while pumpkins are relatively non-toxic, they can still cause some stomach discomfort for pets who take a chomp out of them.

Make sure Peanut actually wants to wear that pirate costume

There's really nothing cuter than a pet in costume, but it's less cute when your animal is clearly uncomfortable. The ASPCA recommends that you don't put your pet in a costume unless they really enjoy it, and maybe opt for a cute bandanna instead if your furry friend appears distressed. You don't want your pet to be in a costume that limits their movement, sight, ability to breathe, bark or meow. In addition, if their costume doesn't fit properly, it can get twisted or caught on things, leading to injuries. Also, be sure there are no small, dangling or easily chewed-off pieces that could present a choking hazard.

You got ID, Buddy?

Halloween is always filled with excitement. But make sure your pets don't get lost amid all the hustle and bustle. Too many strangers can sometimes overwhelm animals, so if your pet isn't the most social creature, it's best to keep them in a separate room and away from the door if you're giving out candy to trick-or-treaters. It's also important for your pets to have some sort of identification, like a collar with ID tags or a microchip, in the event that they do dart out of the house.

Glow sticks are fun — but not food

What's a little Halloween trick-or-treating without some glow sticks? While the neon colored sticks are great for some light during those after-dark thrills, they're not meant for pets. According to petMD, glow sticks aren't toxic for pets, but they can sometimes cause vomiting and discomfort if ingested. If your pet does happen to gnaw on one, petMD recommends giving them some water or a small meal to get the glow stick liquid out of their mouth.