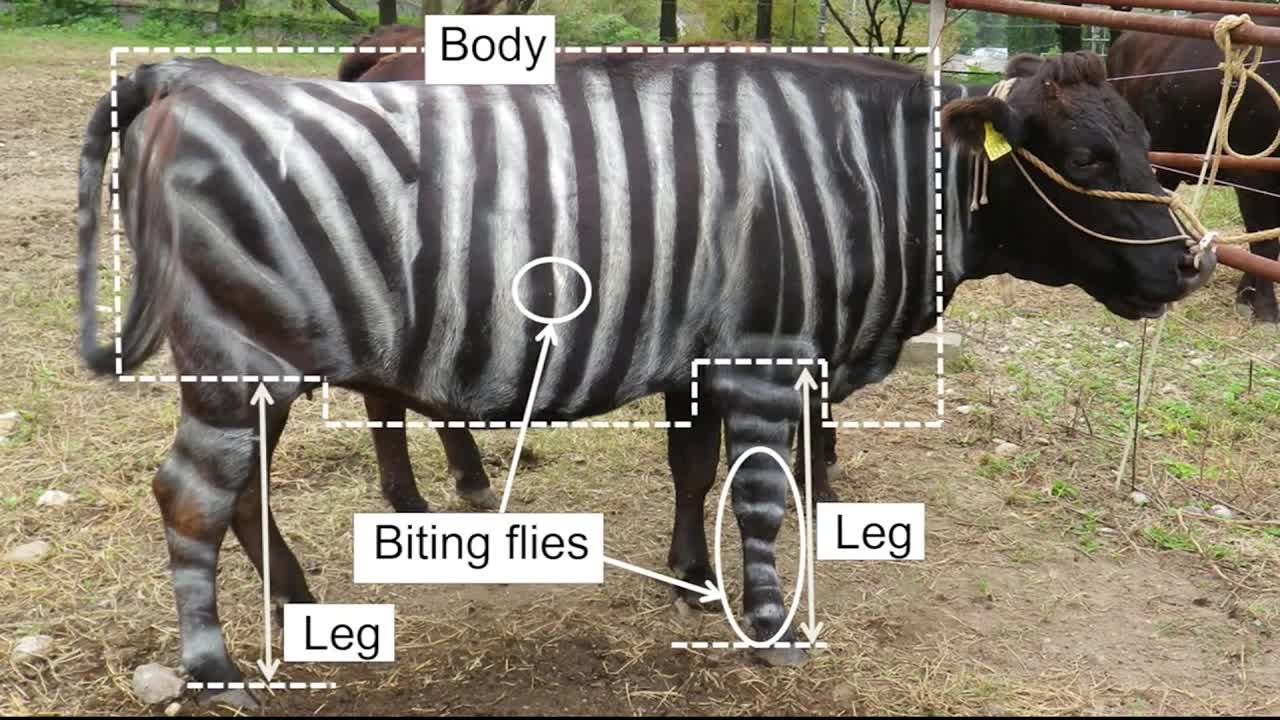 A cow's days of fly-shooing and hoof-stomping might soon be over. All it takes to repel pests is a new paint job, researchers say.

Black cows painted to look like zebras are significantly less likely to endure pesky horse fly bites — nearly 50% less, according to a new study published in PLOS One.

A team of Japanese researchers recruited six cows and gave them each black-and-white stripes, black stripes and no stripes. They took photos of the cow's painted right side, counting the number of bites as they happened and watching how the cows reacted.

While unpainted cows and cows with black stripes endured upward of 110 bites in 30 minutes, the black-and-white cows suffered fewer than 60 in the same period, researchers found.

Zebras' stripes have more than aesthetic value; they help fend off bloodsuckers. Past studies have proven flies are less likely to land on black-and-white surfaces — the polarization of light impairs their perception, so they can't properly decelerate, researchers wrote.

When helpless cows are the victims of fly bites, it stings the humans who own them, too. Biting flies interfere with cows' grazing, feeding and bedding, and they're estimated to cost the cattle industry

Since they can't swat flies away, cows exert significant energy to avoid them, researchers said. They'll bunch, or group close together, to prevent fly attacks, which can increase their risk of heat stress and injury.

It's an environmentally friendly, if tedious, solution

The water-based paint faded within a few days, so while it's a less invasive solution than a pesticide-laced ear tag, it's a short-term one. Ranchers would need to spray down thousands of cows multiple times a week for best results.

But fewer bites would improve the health of the cows, which would benefit the economy. Plus, subbing in paint for pesticides would benefit the environment and human health, too, researchers said. It seems the weekly art project might just be worth it.