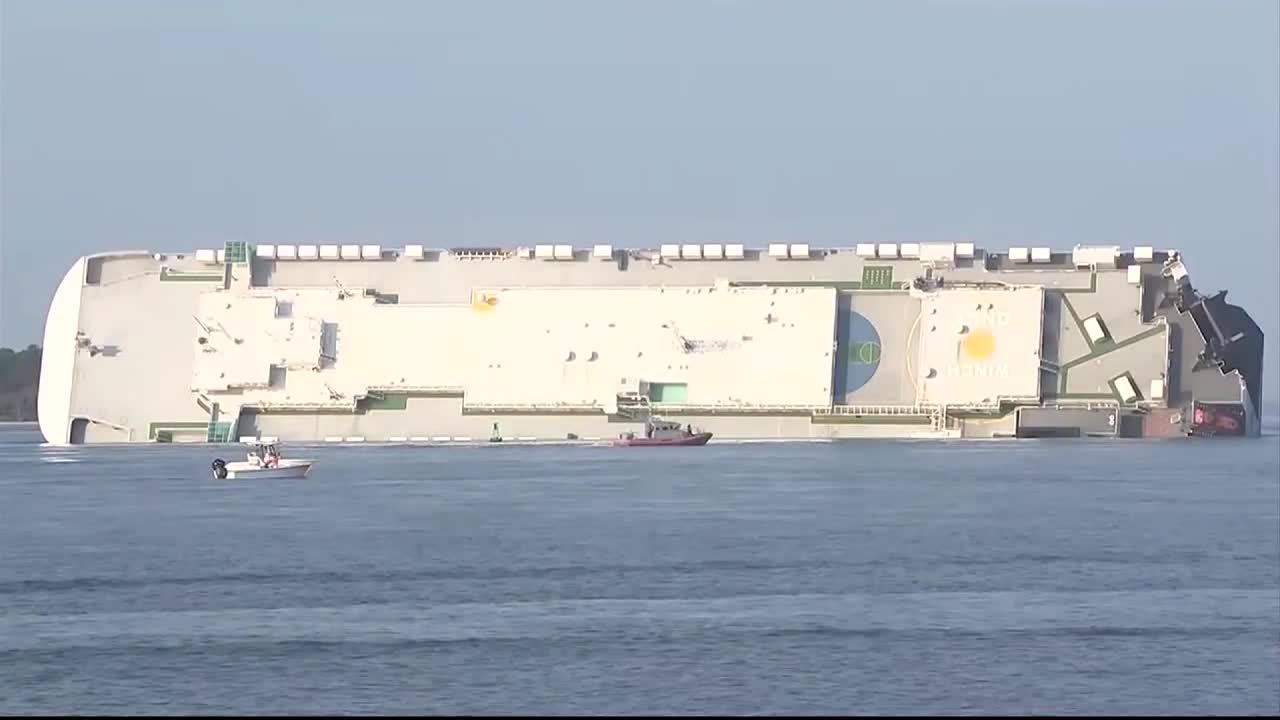 The last crew member trapped aboard a cargo ship that capsized off the Georgia coast has been rescued, the US Coast Guard said Monday.

Three crew members who were in the propeller shaft area of the Golden Ray cargo ship were rescued earlier Monday, the Coast Guard said. The final crew member had been trapped behind glass in an engineering control room, Coast Guard Capt. John Reed, the incident commander, told reporters.

Video from the Coast Guard showed crews cheering and clapping as the final member was rescued.

"That is amazing. The best day of my career because you guys did that. Outstanding," Reed said from the scene during the final rescue.

Speaking about the four crew members, Coast Guard Lt. j.g. Phillip VanderWeit said: "The expressions on their faces said it all."

Three crew members could walk on their own. One crew member was taken from the scene in a rescue basket, VanderWeit said.

The four have been transported to area hospitals.

The Coast Guard has been working since early Sunday to rescue the four South Korean crew members that were unable to get off the ship when it tipped onto its side in St. Simons Sound. The size of the 656-foot ship and the fact it has watertight doors, several compartments and no power complicated the rescue, Petty Officer 1st Class Luke Clayton said.

A salvage team made contact Monday morning with the trapped crew members, VanderWeit said earlier in the day.

A team overnight heard tapping sounds from the propeller shaft area, he said. Rescuers were dropped off via helicopter and drilled a small hole in the ship to communicate with the crew members, VanderWeit said.

A call for help

The first dispatches from the ship came at around 2 a.m. Sunday, VanderWeit said.

South Korea's Foreign Ministry said the ship began "listing heavily," about 80 degrees, to the port side before overturning. Help arrived about two hours after the first call came in, VanderWeit said.

Twenty members of the crew were rescued around 4 and 5 a.m., VanderWeit said. They exited via various parts of the vessel, which posed a challenge in getting them off the ship.

Some crew members were hoisted onto helicopters while others were lowered -- in some cases by fire hoses -- onto boats, VanderWeit said.

Fires broke out on the ship, preventing rescuers from continuing their efforts to save the remaining four crew members, said Capt. John Reed, commander of the Coast Guard Sector Charleston.

"As smoke and flames began to appear our crews, along with the Glynn County heavy rescue team, assessed that the situation was too risky to further go inside the vessel to attempt to locate the four individuals who remain missing at this time," Reed said.

The Coast Guard remained on the scene, trying to stabilize the ship, and they continued to search the waters surrounding the vessel, VanderWeit said.

The ship, sailing under the flag of the Marshall Islands, was bound for Baltimore, where it was expected to arrive Monday, according to MarineTraffic.com . The Coast Guard told CNN the ship was carrying automobiles.

Crew members given food and clothing

Some of the initial 20 crew members who were rescued told CNN they didn't know what happened. They were asleep when the ship started listing, they said.

The crew members were given aid by the International Seafarers' Center in Brunswick, said Vicki West, the center's director.

Her organization provided food and clothing to between 18 and 20 crew members, all of them Filipino and South Korean, she said in an email.

They were in good condition, she said.

Volunteers from her organization served them lunch and helped those who wanted to attend Mass at St. Francis Xavier Catholic Church.

The crew members received bags with hygiene items, socks, toothpaste and games, some of which were donated to the center by the community, West said. They also gave Bibles and promise books to the crew members, she said.

Officials are still trying to determine what caused the ship to overturn.

Two investigators from the National Transportation Safety Board, which is supporting the Coast Guard investigation, were expected to arrive on the scene Monday, according to NTSB spokesman Keith Holloway.

South Korea's Foreign Ministry sent a consul from Atlanta to the scene to determine the status of the rescue and provide consular assistance to those who were rescued.

The cargo ship, owned by South Korean-based cargo logistics company Hyundai Glovis , carries vehicles and had just been unloaded and reloaded by longshoremen at the Port of Brunswick in the hours before it began leaning, a longshorewoman told CNN. The loading process went smoothly, and nothing seemed out of the ordinary, she said.

"There were no extreme circumstances that lead us to believe that our proper handling methods weren't abided to," he said.

Representatives from Hyundai Glovis were at the scene on Monday.

"We think the Coast Guard is doing a great job," Cornell said.

Once the ship is stabilized, salvage crews will find the best way to remove the ship without creating an environmental incident, the Coast Guard's Clayton said.

The vessel was leaking some oil into the waterway, said Chris Graff, the director of response services for Gallagher Marine Systems, Hyundai Glovis' designated spill management company. He said the oil was possibly from hydraulic fuel and from the engine.