Where does astronaut poop go? 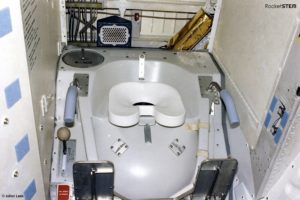 FINAL FRONTIER – People have a lot of questions (and misconceptions) about space.

It’s understandable given that only 573 humans have ever gone there, according to a count by space expert Jonathan McDowell.

Still, they shouldn’t be the only ones who get to know the truth about what happens in the great beyond. Right?

Fear not. NASA has answered for us some of THE MOST IMPORTANT questions people absolutely, positively must know about space travel. (You’re welcome.)

Where does astronaut poop go?

Solid waste is collected in a canister as part of the waste hygiene component of the space station’s toilet, and those canisters are disposed of during destructive reentry of cargo spacecraft. Urine is collected separately and sent through the station’s Water Recovery System’s distillation assembly which helps transform urine from crew members into usable water.

Do they really eat freeze-dried ice cream in space?

No. Astronauts do not eat freeze-dried ice cream, but sometimes a cargo resupply spacecraft brings a special treat of real ice cream. Sending ice cream is sometimes possible when there is space in one of the freezers on the way up that will be filled with science samples for SpaceX Dragon’s return trip. It is normal for commercial resupply missions to deliver a small amount of fresh food to the astronauts (usually fruits or vegetables) with ice cream only occasionally making the trip.

Do people explode if they’re not wearing spacesuits?

No, but you’ll still die. Without protection, an astronaut would die in space quickly because of the lack of oxygen and immense physical pressure. The cold and radiation are pretty dangerous too. Spacesuits provide air to breathe, water to drink, a pressurized environment in which to work and protection from extreme temperatures.

What happens when astronauts get sick?

Astronauts tend to be very healthy as they work out more than two hours a day and live in a closed environment. But they have access to doctors via video or telephone, and the space station has a variety of medical devices and pharmaceutical remedies to treat astronauts who may get sick in space.

Yes. Without gravitational force compressing an astronaut’s spine, fluid between the discs fluctuate as they temporarily expand, creating a lengthening effect. We experience the same effect while sleeping flat at night, although to a lesser degree. In space, an astronaut will sometimes “grow” as much as two inches taller. However, that effect disappears as soon as they return to Earth’s gravity.

How do we know gravity exists in space?

On Earth, we experience the pull of gravity, but astronauts in the space station are in a kind of perpetual free-fall around Earth that keeps them in orbit, and thus they experience what is commonly referred to as zero-gravity or microgravity in which they can float and fly through the space station.

Is it true no one can hear you scream?

Without air to transmit sound waves, a scream would not be heard in space — even if you’re next to the person.