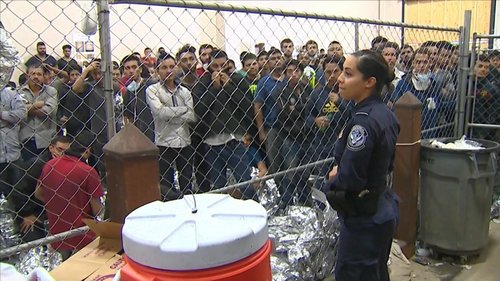 US Border Patrol Chief Carla Provost said on Wednesday that she was a member of a secret Facebook group that reportedly contains vulgar and offensive posts, adding that she told internal investigators once she realized her involvement.

“Not only did I self-report, I turned my entire Facebook account over,” she said before a House Appropriations subcommittee. “I gave them my log-in and my password.”

Provost denied knowing of the “highly offensive and absolutely unacceptable posts” ahead of the ProPublica investigative report that first exposed the Facebook group dubbed “I’m 10-15.” The name refers to Border Patrol code 10-15 for “aliens in custody.” Earlier this month, The Intercept reported Provost was a member of the Facebook group.

The closed group reportedly contains current and former Border Patrol agents and posts containing jokes about migrant deaths, derogatory comments about Latina lawmakers and a lewd meme involving at least one of them.

Provost’s congressional testimony comes as Democratic lawmakers express outrage over the growing humanitarian crisis on the southern border and reports of deteriorating conditions at border facilities. Nationwide protests were held across the US earlier this month to demand the closure of detention facilities holding migrant children and families.

Provost said that as soon as she saw the ProPublica report, she put an announcement to the workforce condemning the actions of the individuals on the group. She said, “It is completely unacceptable and not representative of the Border Patrol as a whole.”

Provost said sometime in 2017, a year after she said she joined Facebook, a colleague invited her to some groups.

“I didn’t think anything of it at the time,” she said, adding she is on the platform “very, very rarely.” She said she used Facebook to connect with friends and see how the workforce “feels I am doing,” after she was told some people were posting about her tenure in leadership.

Internal investigators for US Customs and Border Protection identified 70 individuals, 62 of which are current employees, who are connected with inappropriate or derogatory posts or the Facebook groups that had such posts, they announced earlier this month.

Assistant Commissioner for CBP’s Office of Professional Responsibility Matt Klein told reporters earlier this month the majority of the individuals identified so far are from the “I’m 10-15” group, while some were part of other Facebook groups, including “The Real CBP Nation.”