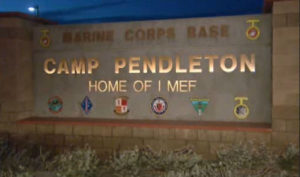 OCEANSIDE, Calif. – Sixteen Marines at California’s Camp Pendleton have been arrested following a human smuggling investigation, according to the Marine Corps.

The 16 Marines were arrested Thursday morning on allegations ranging from human smuggling to drug-related offenses, the 1st Marine Division said in a statement. The arrests were carried out by division officials and the Naval Criminal Investigative Service during battalion formation.

The arrests come only weeks after two Marines at the base, located north of San Diego about 55 miles from the U.S.-Mexico border,  were arrested near the border by a Border Patrol agent. The two Marines were accused of smuggling three Mexicans into the United States. The Marine Corps said information gained from those arrests led to Thursday’s arrests.

They were reportedly pulled over by a Border Patrol agent July 3, driving a car near the border in Jacumba Hot Springs with three undocumented immigrants riding in the back seat. Citing a federal criminal complaint, Law allegedly said Salazar-Quintero had called him the previous night “and asked him if he was willing to make $1,000 picking up an illegal alien,” the paper reported. Salazar-Quintero allegedly said it was Law who introduced him to a recruiter who dispatched them to pick up people near the border, according to the paper.

“1st Marine Division is committed to justice and the rule of law, and we will continue to fully cooperate with NCIS on this matter,” the Marine Corps statement said. “Any Marines found to be in connection with these alleged activities will be questioned and handled accordingly with respect to due process.”

Marines this year were brought in to help support the Department of Homeland Security in reinforcing the border by installing razor wire on top of existing barriers. Military troops are barred from making arrests of immigrants.