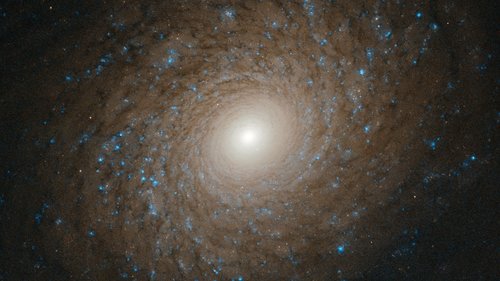 More than 70 million light years away from our solar system is a stunning spiral galaxy recently observed by the Hubble Space Telescope.

The spiral galaxy, known as NGC 2985, can be found in the Ursa Major, or Great Bear, constellation.

The universe is full of spiral galaxies, comprising about 77% of those observed. Our own home galaxy, the Milky Way, is one of them. And from certain perspectives, they appear like a flat circle. But these galaxies are much more complex.

In NGC 2985, there are multiple spiral arms full of stars. They start out close and tight before spreading out from the galactic core and appearing to fade into space.

In a spiral galaxy, the arms are full of gas and dust. They act like the birthplace for new stars to form continuously. The arms spread out from the galactic bulge at the center, which contains old stars and very little new star formation.

Over time, many spiral galaxies collide with others. The galaxies merge, which makes them appear more circular as the spiral arms condense.

But the passage of time does other strange things to galaxies.

Earlier this year, astronomers discovered that the Milky Way is actually being warped and twisted by the stars within it.

In the Milky Way, stars and gas clouds exist mainly in its two spiral arms.

From afar, the Milky Way appears like a thin rotating disk of stars, orbiting the center every few hundred million years. In the center, hundreds of billions of stars and dark matter hold the galaxy together.

But as you move toward the outermost reaches of the galaxy, the gravitational glue of the center fades. In the outer disk, this keeps hydrogen gas from being confined, which contributes to an S-shaped warping.

Using 1,339 large, pulsating stars to compile a 3-D map of the Milky Way, researchers discovered that the galaxy’s disk of stars is increasingly twisting, most likely due to the spinning of the disk. And the farther the stars are from the center, the more twisted it becomes.

Only time will tell what fate awaits NGC 2985.