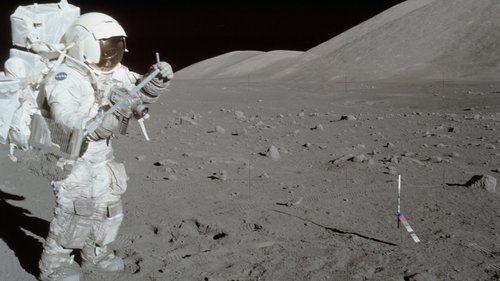 Fifty years after humans first stepped on the moon during the Apollo 11 mission, NASA has created a goal of landing the first woman and next man on the moon’s South Pole by 2024. NASA has dubbed this path back to the moon Artemis, after Apollo’s twin sister from Greek mythology.

But why should we return to the moon? Many experts feel that it’s necessary and overdue, especially as the desire to land humans on Mars and push deeper into the solar system continues.

The quest for human exploration never ended after Apollo was shuttered. Skylab, the shuttle program, the International Space Station and even robotic missions throughout the solar system have continued the spark that Apollo started.

But astronauts haven’t been to the moon since the Apollo 17 mission, when Eugene Cernan and Harrison Schmitt collected samples of the lunar surface, conducted experiments and took photos — including the famed “blue marble” image of Earth.

Cernan and Schmitt, the only scientist to ever walk on the moon, landed in the Taurus-Littrow valley on December 11, 1972.

“America’s challenge of today has forged man’s destiny of tomorrow,” Cernan said as they departed. “As we leave the moon and Taurus-Littrow, we leave as we came, and, God willing, we shall return, with peace and hope for all mankind.”

“President Donald Trump has asked NASA to accelerate our plans to return to the Moon and to land humans on the surface again by 2024,” NASA Administrator Jim Bridenstine said in a statement in March. “We will go with innovative new technologies and systems to explore more locations across the surface than was ever thought possible. This time, when we go to the Moon, we will stay. And then we will use what we learn on the Moon to take the next giant leap — sending astronauts to Mars ”

The next five years will require commercial and international partnerships to set up an infrastructure on and around the moon, reusable spacecraft, sustainable architecture and identifying ways to use the moon’s resources, the agency said.

And as with Apollo, the relatively quick timetable for Artemis is meant to spark innovation, ambition and opportunity.

Stepping on the moon gave us a foothold in space.

“The Apollo program made space accessible to us,” said Mason Peck, former NASA chief technologist and professor of mechanical and aerospace engineering at Cornell University. “Those brief visits to the moon set a high bar for NASA and for all space exploration since.”

In order for Apollo to be possible, NASA had to build a complex system. Spaceflight navigation had to be configured. Although there was a foundation of the mechanics of flight in the military, space was new territory. Everything was new. Apollo even helped trigger the formation of planetary science as its own field.

“It really built a infrastructure that didn’t exist,” said Marshall Smith, NASA’s director of human lunar exploration. The program created a boost for technology and economy and allowed for the return of lunar samples to Earth, enabling a better understanding of our solar system’s history.”

When he worked for NASA in the 1960s, rocket developer Wernher von Braun had a vision for space exploration: building a space shuttle and a space station, followed by going to the moon and Mars. NASA went about it in a different order for a number of reasons, and it was the beginning of our space exploration journey.

“The DNA of NASA is human exploration,” Peck said. “That DNA is Apollo and humans achieving grand things.”

The Apollo missions went to moon’s equator, specifically the center of the side of the moon that faces Earth, because it allowed for communications. Since then, missions like NASA’s Lunar Reconnaissance Orbiter have orbited the moon and provided global mapping, shedding light on the interesting places that Apollo couldn’t reach, said Timothy Swindle, director of the University of Arizona’s Lunar and Planetary Laboratory. The lab was created in part to support the Apollo lunar landings, and Apollo samples are still studied there.

Global mapping of the moon has raised interest in the poles and areas that sit in continual darkness, like craters where the sun can’t reach. China’s Chang’e4 mission recently landed on the far side of the moon, but NASA has yet to go there.

Artemis and the Gateway

Going back to the moon to stay won’t be easy, but neither were the Apollo missions.

NASA’s Moon to Mars program will involve the Orion spacecraft, the Gateway and the Space Launch System rocket, known as SLS. One of the key features of the program is sustainable space exploration with reusable spacecraft and architecture.

The SLS rocket will be able to send Orion, astronauts and large cargo to the moon all at once, NASA said. And in the future, it could support robotic missions to Mars, Jupiter and Saturn.

Orion will be able to dock at the Gateway, a spaceship that will go into orbit around the moon and be used as a lunar outpost. About 250,000 miles from Earth, the Gateway will allow easier access to the entire surface of the moon and potentially deep-space exploration.

“We need to explore the whole moon this time,” Swindle said. “With something like the Gateway, we would have the opportunity to get anywhere on the moon. And the moon serves as a Rosetta Stone for understanding the rest of the solar system.”

There are many reasons to go back to the moon. It’s an unchanging geologic time capsule full of resources, but it’s also a good nearby test for the next step in space exploration: Mars.

“The moon is logical place to learn how we do things,” said Mark Sykes, director of the Planetary Science Institute. “It’s easier than going to Mars, but the moon is close and convenient. There, we can start building up the infrastructure that makes Mars possible.”

The moon is also a stepping stone to the rest of the inner solar system where space agencies and businesses can form partnerships, said Ray Jayawardhana, dean of Cornell University’s College of Arts and Sciences.

“Half a century later, returning to the moon is overdue,” Jayawardhana said. “I would hope that it is a sustained effort, a long-term national commitment, one that also involves international partnerships and public-private collaborations. A multidimensional lunar program would be quite exciting. Apollo 11 landed on the moon five years after the first American robotic probe reached the surface. And this is an ambitious goal in the foreseeable future that rallies science, technology and the human spirit together.”

Currently, the focus is on the moon, but NASA sees these concepts as workable for a Mars mission, as well.

“The goal is to try to develop systems that could be used in either location with as little change as possible,” said Michelle Rucker, Mars Integration Group lead.

Regarding the moon and Mars, initial launches of cargo will go up before humans, and the SLS will have that heavy launch capability, Rucker said. The Gateway could even be used as an assembly point for the architecture required to stay on the moon and Mars.

Many believe that Mars is the next logical step. It’s relatively closer, is not too hot, doesn’t receive as much radiation as other planets, and has a little bit of an atmosphere and gravity, Smith said. It’s time to investigate the Red Planet from a human perspective, and NASA is targeting the 2030s for a manned mission.

But we’re not there yet, because a mission to Mars comes with a wealth of challenges that must be met. There’s about a 26-month period in which the planets line up just right and it’s easier to get back and forth between Mars and Earth.

“If you’re looking at the odometer on your vehicle, to get round trip from here to Mars and back, it’s about 2,000 times as far as going to the Moon and back,” Rucker said. “We’ve got to sort of chase Mars around the sun. We need a reliable in-space transportation system.”

The landers will also have to be bigger. The Curiosity rover, the largest thing to land on Mars to date, weighed about 1 metric ton. A manned mission to Mars will be about 20 times that, the agency estimated.

Experts are looking at entry, descent and landing technology that could inflate upon entry, slowing the descent in the thin Martian atmosphere and landing substantial weight on the surface.

Like the plan to return to the moon, using the natural resources of Mars, like water, will be imperative. During the Apollo missions, the astronauts brought everything they needed with them.

“It was like a road trip, when we went with Apollo,” Rucker said. “This is going to be more like a camping trip, where we’re going to try to use what’s available there.”

Because a trip to Mars wouldn’t last only a few days but actually have astronauts living on the surface for at least a year, power is another challenge to overcome. Like Earth, Mars cycles between day and night. It’s also farther from the sun than Earth and can experience dust storms, so solar power isn’t the only or most reliable choice. NASA and the Department of Energy are working on a small reactor that could allow for setting up power stations.

The astronauts going to Mars will also need to be more diverse in every way, Peck said. They will need to be at ease working with one another but also able to improvise and be self-reliant. Some of them may need to be able to write or change software or operate 3D printers, combining a maker and survivor mentality.

“It’s less the skills of Apollo and more of a Silicon Valley approach,” he said.

But much as the Apollo program spurred a wave of innovations we could use on Earth, returning to the moon and eventually traveling to Mars will inspire even more.

“When you dream big, you can achieve what only seemed impossible,” Cheryl Warner, Artemis public affairs officer, wrote in an email. “NASA proved this when it met President Kennedy’s challenge to put Americans on the Moon within a decade in the 1960s. With Apollo, we captured the world’s attention and demonstrated the power of America’s vision and technology to inspire generations of great achievements, exploration, and scientific discovery. Our goal now with the Artemis program is to return to the Moon and to stay, in a sustainable way. On and around the Moon, we will broaden our commercial and international partnerships and prove the technologies, capabilities and new business approaches for our next giant leap, sending astronauts to Mars.”