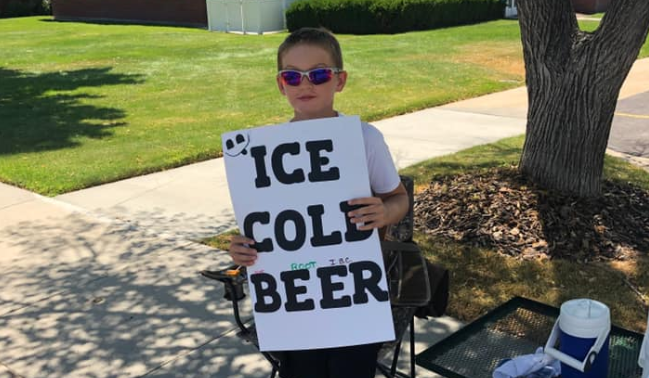 Most kids are selling lemonade on hot summer days, but a boy from Utah had an even better idea — ice-cold beer. Root beer, that is.

Seth Parker set up his “ICE COLD BEER” stand in front of a church in Brigham City, Utah. The kid had his neighborhood fooled, with the local police department receiving several calls from concerned neighbors Tuesday.

When officers arrived to check on Seth, it turned out he was just a savvy marketer. “Yep, he’s selling beer … ROOT BEER, that is,” Brigham City Police Department wrote on Facebook.

“His marketing strategy has resulted in several calls to the BCPD, but apparently its paid off as business has been good,” the police wrote.

If you look closely enough at the sign, the word “root” can be seen in tiny letters just above “BEER.”

Business seems to be booming since the boy went viral. According to his mom Alexis Parker, he sold out on Tuesday, but would be back.

“I just bought him out,” Deedre Coy Petersen wrote on Facebook. “He’ll be back tomorrow, possibly with a more easy to read “Root” on there. SO many people still stopping to give dirty looks. It was cute and funny. No children were harmed in the selling of this ROOT beer.”