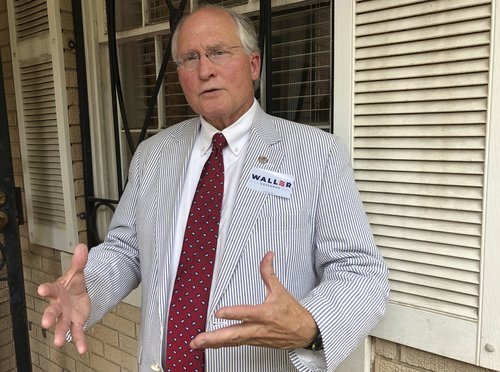 A second Republican candidate for Mississippi governor said he would not be alone with a woman who is not his wife in a professional or personal setting, after fellow candidate state Rep. Robert Foster’s decision to deny a female reporter’s request to accompany him on a campaign trip for the same reason.

Bill Waller Jr., the former chief justice of the Mississippi Supreme Court, told Mississippi Today that he subscribes to what is known as the “Billy Graham rule,” named after the prominent evangelist, in which a man avoids being alone with women other than his wife.

“I just think it’s common sense. I just think in this day and time that appearances are important … transparency’s important. And I think that people need to have the comfort of what’s going on in government between employees and people. And there’s a lot of social issues out there about that,” Waller told the news outlet on Monday.

He said his goal “is to not make it an issue so that everyone’s comfortable with the surroundings and we can go about our business.”

CNN has reached out to Waller’s campaign.

Waller told Mississippi Today that in his 22 years serving on the state Supreme Court, he never found himself alone with a female colleague.

“I tried to (always have someone else present),” he told Mississippi Today, adding that he would not, however, demand that the woman provide the other male colleague.

Last week, Foster declined Mississippi Today’s request to send a reporter on the trail with him for the day because the reporter was female unless she brought along a male colleague, saying he did so because he “just wanted to keep things professional.”

Waller’s campaign told Mississippi Today last week it is their practice to have a campaign staffer with Waller when he is speaking with the media so the situation was a “non-issue.” Waller told the news outlet Monday, that he would not have asked a woman to provide another person to be in the room for a meeting.

“In my situation I always made sure that I was in control of the situation — that’s the way I do business,” he said.

The Mississippi Today reporter, Larrison Campbell, said the news outlet had asked to shadow each of the candidates in the race “in an attempt to better inform readers.”

Foster said on Twitter that his Christian faith and marriage were among the reasons to deny Campbell access and told CNN that he was worried that the situation may inadvertently create a false impression.

“I trust myself completely, but I don’t trust the perception that the world puts on people when they see things and they don’t ask the questions, they don’t look to find out the truth,” Foster said. “Perception is reality in this world, and I don’t want to give anybody the opinion that I’m doing something that I should not be doing.”

“Why does it appear improper for a man to be with a woman? I mean, why wouldn’t a gay affair be construed if he were with a man?” Campbell said. “Unless, at the end of the day, what you’re saying here is a woman is a sexual object first and a reporter second.”