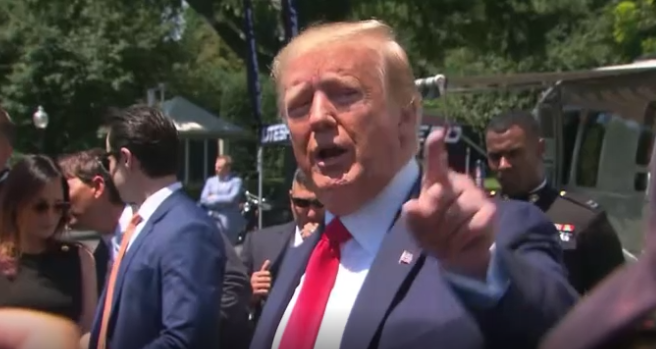 As fallout continues from President Trump’s tweets telling a group of Democratic congresswomen to “go back” to their countries, House Speaker Nancy Pelosi is looking to counter the president’s comments legislatively by introducing a resolution to officially condemn Mr. Trump’s remarks.

In a letter to her Democratic colleagues on Monday, Pelosi wrote that Mr. Trump “went beyond his own low standards using disgraceful language about Members of Congress.” Mr. Trump targeted freshmen Reps. Alexandria Ocasio-Cortez, Rashida Tlaib, Ayanna Pressley and Ilhan Omar in his series of tweets on Sunday.

“Let me be clear, our Caucus will continue to forcefully respond to these disgusting attacks,” she urged.

While light on details, the legislation is co-sponsored by Rep. Tom Malinowski, who Pelosi notes was born abroad, and Rep. Jamie Raskin, “along with other Democratic Members born abroad.”

“The House cannot allow the President’s characterization of immigrants to our country to stand. Our Republican colleagues must join us in condemning the President’s xenophobic tweets,” Pelosi added.

Pelosi is the second Democrat to propose such a move after Texas Rep. Sheila Jackson Lee tweeted that she would be drafting a similar resolution of condemnation against Mr. Trump. It’s unclear how, if at all, Lee’s draft would be folded into Pelosi’s legislation.

The action comes after Mr. Trump doubled down on his tweets and told reporters at the White House on Monday that he does not think tweets were racist.

“If somebody has a problem with our country, if somebody doesn’t want to be in our country they should leave,” Mr. Trump added.