Dazzling new views of the Whirlpool galaxy captured by NASA 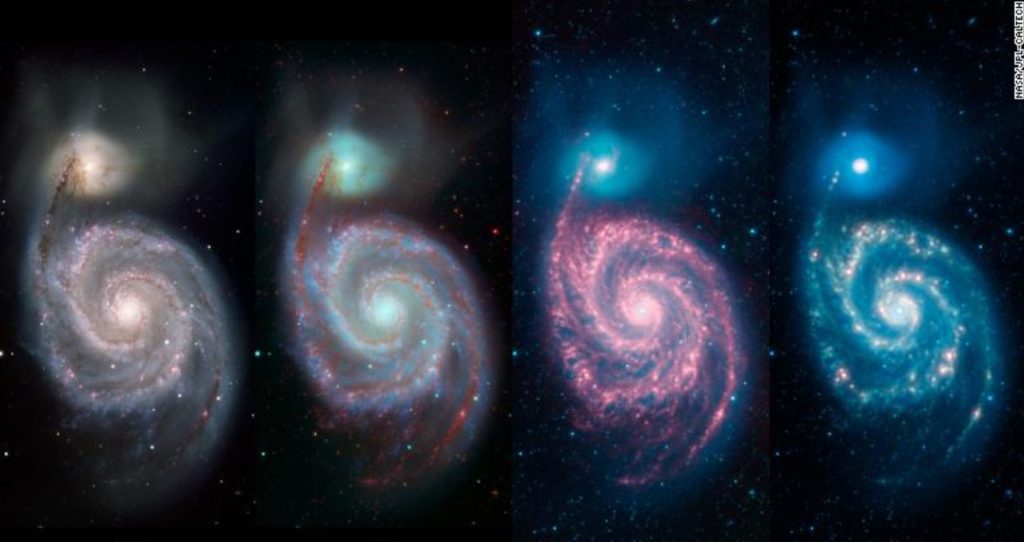 NASA’s Spitzer Space Telescope captured stunning views of the Whirlpool galaxy in infrared light that are reminiscent of an Andy Warhol painting.

The grid resembles one of his silkscreen grids that repeat images in varied colors. In reality, the different colors actually represent different light wavelengths, starting with visible light as it appears to the human eye on the left and adding in infrared light that Spitzer is able to capture.

The first image on the left was captured by the Kitt Peak National Observatory’s telescope. The dark lines in the spiral arms represent dust, which cloak the stars embedded in it or behind it. The second panel includes blue and green visible light as well as Spitzer’s red data. Spitzer’s infrared detections help illuminate the dust.

The two images on the right represent Spitzer’s infrared perspective in different ranges.

The Whirlpool galaxy is really two galaxies that are pulling on each other, causing distortion through gravity. The pair is in the constellation Canes Venatici, 23 million light-years away.

Spitzer is an infrared detective and by illuminating dust, the telescope also allows astronomers to see dense gaseous areas between stars that are normally difficult to detect.

Being able to see the Whirlpool galaxy in infrared also highlights the difference between the galactic pair. The small galaxy is at the top, almost bare of dust. Meanwhile, the spiral galaxy dominating the image radiates with glowing dust. The haze around the small galaxy represents the starlight being cast out of both galaxies as they gravitationally pull on each other.

For 16 years, Spitzer has acted as our infrared eye in the sky, finding hidden objects around the universe. The space observatory’s mission will come to an end in January 2020.