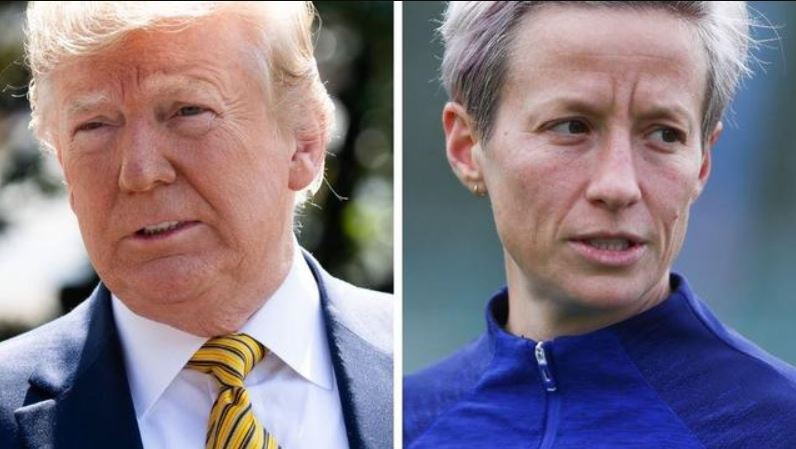 The star forward has been protesting during the “Star Spangled Banner” since former 49ers quarterback Colin Kapernick began doing it at NFL games to call attention to police brutality and social injustice in 2016.

After the USA’s 2-1 victory over Spain Monday, Mr. Trump gave an interview to The Hill about the team and Rapinoe, who scored both goals in the thrilling win. When asked if he thought Rapinoe protesting during the anthem was appropriate, he replied, “No. I don’t think so.”

Rapinoe, who is openly gay, initially started to protest in solidarity with Kapernick by kneeling when the anthem was played at National Women’s Soccer League and women’s national team games. But when the U.S. Soccer Federation adopted a policy that requires players to “stand and honor” the flag, she decided to follow it.

Before the FIFA Women’s World Cup in France kicked off, Rapinoe, who see herself as a “walking protest when it comes to the Trump administration,” told Yahoo Sports she wouldn’t sing the anthem or place her hand over her heart. And so far, she hasn’t.

The president also sidestepped on whether the women’s team should be getting equal pay as the men’s team, despite being more successful than them on the field. Twenty-eight players have sued U.S. Soccer over the pay wage gap, alleging gender discrimination.

“I think a lot of it also has to do with the economics,” Mr. Trump said. “I mean, who draws more? Where is the money coming in? I know that when you have the great stars like (Cristiano) Ronaldo and some of these stars … that get paid a lot of money, but they draw hundreds of thousands of people.”

The reigning champion U.S. team has been on a tear so far in the FIFA Women’s World Cup. The Americans have scored 24 goals in four matches and have only allowed one goal, which came on Monday versus a surging Spanish squad. USA will play France on Friday in the quarterfinals.