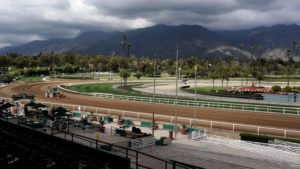 ARCADIA, Calif. – A 30th horse has died at Santa Anita Park in Southern California since the race season began. A California Horse Racing Board rep confirmed that American Currency, a four-year-old gelding, was hurt while exercising and subsequently euthanized Saturday morning.

American Currency is the fourth horse trained by Jerry Hollendorfer that has died this season at the track, CBS Los Angeles reports. According to The Stronach Group, which owns Santa Anita, Hollendorfer “is no longer welcome to stable, race or train his horses at any of our facilities.”

The animal advocacy group People for the Ethical Treatment of Animals issued a statement praising officials for banning Hollendorfer but still calling for further action.

“PETA and Social Compassion in Legislation are working with the California Horse Racing Board and California legislators to enact rules and legislation to get to zero fatalities and this means that trainers with multiple violations must not be licensed in this state. Ending all racing cruelty would be the best, but nothing less than these conditions is acceptable,” PETA said in a statement.

According to a CBS Los Angeles investigation, more than 60 horses have died at Santa Anita Park since the beginning of 2018. The recent spate of deaths has been met with condemnation by state lawmakers, including Sen. Dianne Feinstein and Gov. Gavin Newsom.

“I continue to be troubled by the horse deaths at Santa Anita Park,” Newsom said earlier this month. “Enough is enough.”

The Los Angeles County district attorney’s office is investigating the recent increase of horse deaths. The racing season ends tomorrow amid increasing calls for the track to be shuttered.