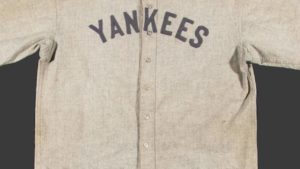 It the most expensive piece of sports memorabilia ever sold, according to Hunt Auctions. The item was among a trove of possessions put up for auction by Ruth’s family, including family photos, hunting gloves and a suitcase Ruth traveled with on a trip to Japan in 1934.

The jersey dates back to the latter part of Ruth’s career and was worn from 1928 to 1930 when Ruth negotiated for and eventually received an unprecedented salary of $80,000 for two years. Ruth retired from baseball at the end of the 1937 season and died in 1948.

Tosetti says a portion of the proceeds from the auction will go to charity.

The Babe it still breaking records! Jersey worn by @mlb and @Yankees icon Babe Ruth c. 1928-30 sets a world record price of $5,640,000 for any piece of sports memorabilia!! Live auction at @yankeestadium still has the mythical presence of the Bambino #Yankees #SultanofSwat pic.twitter.com/4yFirdcjK6