Oklahoma man supports LGBTQ Pride month with message on his truck: “Not all country boys are bigots” 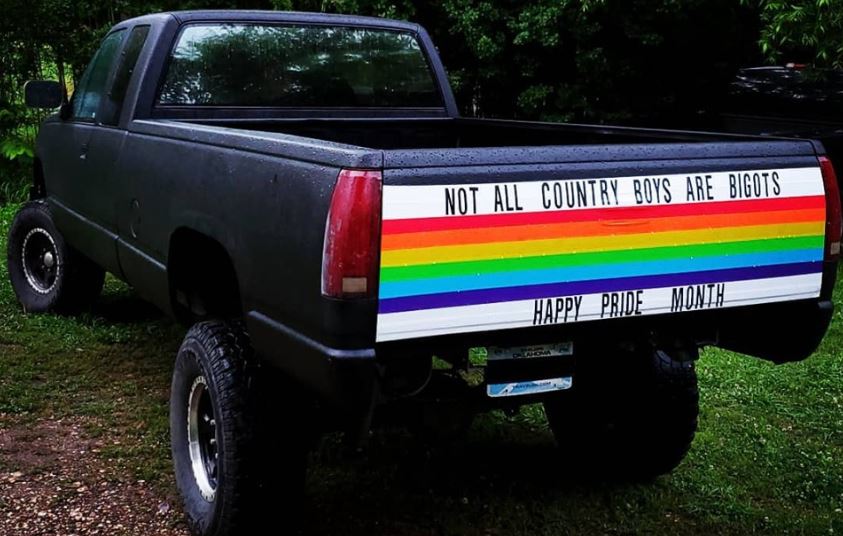 Cody Barlow lives in a rural town in Oklahoma, not the place many would typically associate with Pride month. But he is trying to show those in the LGBTQ community his support in a very unique way — with a special message and a rainbow on his pickup truck.

“Not all country boys are bigots,” bold black letters read on the back of his large truck.” Happy Pride month.”

Barlow first posted the image of the creative display of solidarity on his Facebook page on June 6. “I simply bought rolls of brightly colored duct tape and ran them across my tailgate in the design of the pride flag, and added some mailbox letters,” he wrote.

While he identifies as a straight, Barlow said it is “important” to him to show support. “I have family and friends that are LGBTQ+, but also because countless people have dealt with hatred and judgement simply for who they are, and/or who they love, for far too long,” he wrote in the post. “Obviously doing this isn’t going to change the minds of those who are intolerant, but hopefully it can help drown out the hatred with love.”

Found a way to show my support for pride month.I simply bought rolls of brightly colored duct tape and ran them across…

Barlow, who also grew up in Oklahoma, said he’s “sure” his Pride support isn’t a “very welcome message around here,” but despite potential pushback, he will leave the design up for the entire month of June.

“It doesn’t matter what negativity I receive for supporting this. I hope that this can help even the slightest bit to encourage and support at least one person that needs it.”

The photo — and his message of acceptance — has garnered more than 78,000 shares on Facebook and 137,000 reactions. It has gotten plenty of responses in real life as well. “People have pulled up next to me on the highway and gave me a thumbs up, some yelled that they loved it as they were passing, some honked and waved,” he told CBS News Tuesday.

Barlow also said the reactions online have been “overwhelmingly positive,” adding that people have told him they cried while reading his post because it was so meaningful to them. He said there have been some negative responses, but they all take place on social media.

“I hope everyone finds their inner strength to finally live life loud and proud without regard for the negativity of ignorant people,” he wrote in the post.

When asked his plans for next year’s Pride month, he said he may have something, “even bigger” in store.