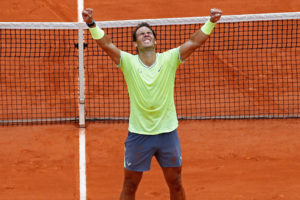 PARIS – With every French Open title comes another remarkable record for Rafael Nadal.

When Nadal beat a weary Dominic Thiem 6-3 5-7 6-1 6-1 on the court he has owned since a teen, the Spaniard became the first player to ever win the same grand slam 12 times. He moved one ahead of Margaret Court’s haul at the Australian Open which he matched a year ago by bettering the same Thiem in Paris.

So the term ‘King of Clay’ just doesn’t do justice to the now 18-time grand slam champion anymore.

His favorite football team, Real Madrid, opts for ‘Galacticos’ to describe players they frequently purchase who are seemingly out of this world.

The 33-year-old is from another tennis planet on clay.

A genuine Nadal remarked during the fortnight he felt someone would come along one day and exceed his trophy haul here.

That seems inconceivable. It is a mastery unmatched by any tennis player on any surface in any era.

Nadal improved to 93-2 at the French Open and has never lost a final. Or even been taken to five sets.

Thiem and other players must have been buoyed when Nadal — coming off another knee injury — began the clay-court swing poorly by his standards.

But beating Novak Djokovic in the Rome final last month was a considerable boost with Roland Garros the grander exclamation mark.

Within two of Federer

For the first time, Nadal pulled to within two grand slams of Roger Federer, the man he eased past in their headline semifinal Friday.

If the 37-year-old Swiss doesn’t win another major, Nadal could get to 20 just by wracking up more victories at Roland Garros.

Yes, if his body cooperates.

For the third straight season, the unfortunate Thiem lost to Nadal at the French Open after defeating him in a warmup.

He thus knows first hand the difference between trying to overcome Nadal over three sets compared to five.

That Thiem was able to make matters competitive is a credit to him — three of the four sets were close, regardless of the final two set scores.

Thiem ended the tournament playing four straight days thanks to the rain in what was a huge disadvantage for the bottom half of the draw.

Who knows what would have happened if he had the usual day off between the semifinal and final.

Thiem’s coach, Nicolas Massu, asked organizers to push the final to Monday to level the playing field but was told there was “no chance.”

Indeed Saturday was about the perfect day for Nadal. Thiem battled for an intense three hours against world No. 1 Djokovic in the completion of their weather-affected semifinal — and won.

Unquestionably he would have preferred Thiem to Djokovic, one of those two players to have derailed Nadal at the French Open and the left-hander’s toughest all-time opponent.

Thiem, very well liked among his peers, is never one for excuses but admitted to feeling the effects of Saturday’s thriller.

“It was a grand slam final, so I didn’t feel tired in the match,” he said. “But at the same time, a match like yesterday, beating Novak over two days with all the interruptions, it leaves traces on the body and also on the mind. That’s 100 percent.”

Thiem — who stretched Nadal to a five-set epic last year at the US Open — said Saturday adrenaline would aid in his efforts to put up a fight against the spin master.

He possesses a brilliant combination of pace and power and more than once in the early going in the intermittent sun, Thiem commendably chased balls and offered up defensive lobs to neutralize the Mallorcan.

His first set performance gave no hint of the struggle with Djokovic.

Thiem trailed by an early break in the 2018 final but on this occasion, the 25-year-old broke first for 3-2 courtesy of his powerhouse forehand.

What wasn’t in the script was to get broken in the next game.

It was a momentum-changing two games but an even more important one was to come.

In an extended 10-minute game, Nadal saved a break point to hold for 4-3.

Reeling, Thiem dropped serve, the game highlighted by Nadal chasing a fine Thiem drop shot and then replying with his own drop shot winner.

Nadal was 84-0 at the French Open when winning the first set so it spelled big trouble for Thiem.

Fans took turns chanting “Rafa, Rafa” and “Dominic, Dominic,” and were rewarded with another sparkling set.

Both men held comfortably without a breakpoint in sight until Thiem conjured two in the 12th game.

And when Nadal sent his backhand long, he claimed his first set in their four Roland Garros duels.

Could he keep it going? Further, would Nadal respond?

After a lengthy bathroom break, Nadal stormed to the first 11 points and tallied a double break advantage with a reflex forehand pass.

The spectators loved it and so did Nadal, who produced a multiple fist pump.

“After the first two sets, I dropped a little bit my level” and then Nadal “stepped on me,” conceded Thiem.

Nadal was now rolling, orchestrating a stunning backhand drop volley that earned a thumbs up from the Austrian. He won 23 of 27 net points.

“Almost everybody will tell you that he’s one of the best volleyers of our game,” Thiem said, before jokingly adding “because the last time he missed a volley was maybe seven years ago.”

He wrapped up the third with a sizzling 10 winners and two unforced errors.

One felt the exertions of the last few days were finally catching up to Thiem by this point but the fourth set wasn’t a formality.

Nadal saved a break point in the first game with a trademark forehand winner, broke and saved two more break points to lead 3-0.

For many Nadal’s power and resilience are what catches the eye. He is a thinker, too.

On the first break point at 30-40, he struck a good serve to Thiem’s backhand and the return went into the net. On the second, he changed direction and went down the middle with pace to prompt a forehand miscue.

Nadal sealed the final on the stroke of three hours when another Thiem return sailed long.

He sunk to the clay, on his back, before exchanging a hug with Thiem. The two share a healthy respect.

In a city filled with one boulangerie after another, Nadal tries for a baker’s dozen of French Open titles in 2020.