Although May 5 is nationally considered a day for celebration, in many tribal communities, it is the National Day of Awareness for Missing and Murdered Native American Women.

The date commemorates the birthday of Hanna Harris, a young mother and member of the Northern Cheyenne Tribe in Montana, who was reported missing in July 2013 and found murdered a few days later.

Hanna’s story is emblematic of the struggle plaguing tribal communities and indigenous women living in cities. Native American women face extremely high rates of violence, an epidemic which is marked by the lack of data around the number of women who go missing or are murdered in and outside of reservations.

Over 5,700 American Indian and Alaska Native women and girls were reported missing as of 2016, according to the National Crime Information Center, but only 116 of those cases were logged with the Department of Justice. Eighty-four percent of Native women experience violence in their lifetime, according to the National Institute of Justice. A 2008 study found that women in some tribal communities are 10 times more likely to be murdered than the national average. 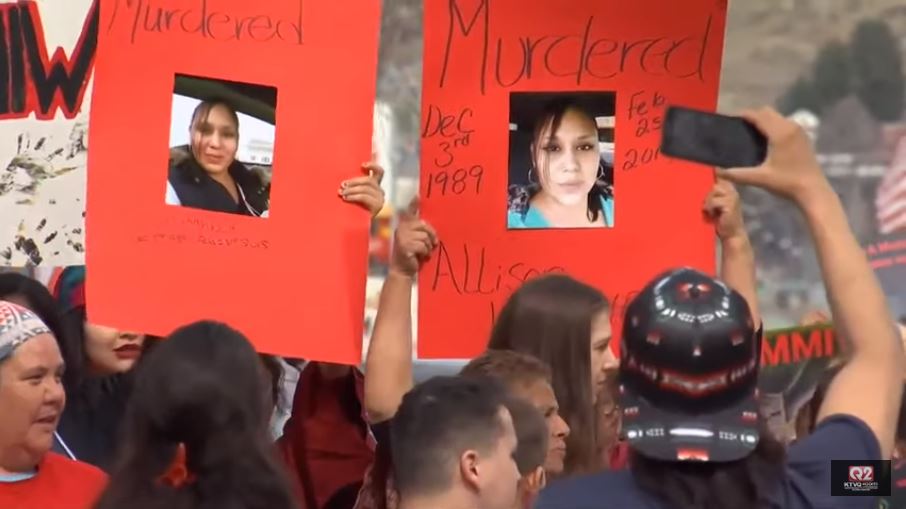 Violence against Native women isn’t just limited to reservations. A November report by the Urban Indian Health Institute found that there have been 506 cases of missing and murdered Native women and girls in 71 cities across the U.S. since 2010. However, this data is almost certainly an undercount — UIHI identified that 153 cases did not exist in law enforcement records. According to the National Institute of Justice, 97 percent of Native women who have experienced violence had been victimized by non-Native perpetrators.

The crisis is exacerbated by several factors. Many reservations are in rural areas with little access to broadband internet or cell phone service. Tribal law enforcement is also often inadequately staffed to oversee such large areas. Meanwhile, because these women are members of a marginalized population, the situation doesn’t get much national attention.

“Right now it’s almost like nobody knows how to deal with this issue, and that’s one of the reasons why it’s been kicked aside for so long,” said Rep. Deb Haaland of New Mexico, one of the first Native American women to be elected to Congress, in a conference call with reporters. “Congress has never had a voice like mine, a Native American woman who sees the blind spots that have existed for far too long. That’s why I’ve been working on multiple bills and legislation to address this crisis.”

In a rare example of bipartisanship in such a divided political culture, members of Congress are working together to raise awareness about the epidemic of missing and murdered Native women and improving the federal response.

A bipartisan group of senators is sponsoring Savanna’s Act, named for Savanna LaFontaine-Greywind, a young pregnant woman who was abducted and killed in Fargo, North Dakota, in 2017. The bill would increase coordination between federal and tribal agencies, improving tribal access to law enforcement databases and mandating that the attorney general and Interior secretary consult with tribes on how to further develop these databases.

“There are all of these questions, and no data. That’s the impetus behind Savanna’s Act,” said Sen. Catherine Cortez Masto, a Democrat from Nevada who introduced the bill with Alaska Republican Sen. Lisa Murkowski this year. “Savanna’s Act is something that was important for us to highlight what is going on.”

The bill was first introduced by North Dakota Democratic Sen. Heidi Heitkamp and Murkowski in 2018. Although it passed the Senate unanimously, it was blocked in the House by former Rep. Bob Goodlatte, the chairman of the Judiciary Committee, who objected to how it dispersed federal funds. Heitkamp was defeated in 2018, but Goodlatte retired at the end of last year, giving the bill another opportunity to pass Congress.

Murkowski and Cortez Masto reintroduced the bill in January. It is co-sponsored by four Republicans — Sens. John Hoeven and Kevin Cramer of North Dakota, Dan Sullivan of Alaska, and Thom Tillis of North Carolina — and six Democrats — Sens. Maria Cantwell of Washington, Tom Udall and Martin Heinrich of New Mexico, Jon Tester of Montana, Chris Coons of Delaware, and Jeff Merkley of Oregon.

Cortez Masto said that senators had made “some additional language changes” after the bill faced opposition in the House last year.

A version of Savanna’s Act was also introduced in the House by Democratic Rep. Norma Torres of California, Republican Rep. Dan Newhouse of Washington, and Haaland in May. Like the Senate bill, it has a raft of bipartisan co-sponsors — including the other three Native American members of the house, Reps. Sharice Davids, Tom Cole and Markwayne Mullin.

“Sometimes the record of that missing indigenous woman or person isn’t documented, leaving questions unanswered for sometimes decades, leading to gaps in information, missing person cases unsolved and perpetrators roaming the streets,” Haaland told reporters. “In this updated version of Savanna’s Act, I worked hard to prioritize the safety of Native women, including urban areas to protect indigenous women throughout the country.”

The bill would create an advisory committee comprised of law enforcement, tribal leaders, survivors, and family members of a victim, which will make recommendations to the Departments of the Interior and of Justice for how to address the crisis. It would also designate an official within the Bureau of Indian Affairs to improve violent crime prevention efforts across federal agencies.

Haaland told reporters that the Not Invisible Act could help the federal government overcome the distrust from Native communities by including Native voices on the advisory council.

“There’s lots of reasons and lots of ways that women go missing,” Haaland said. “We do have to be sensitive and accurate in our descriptions of what happens to these women when they are taken away from their communities.”

Cortez Masto, Murkowski and Tester introduced the bill in the Senate in April.

“It was designed to work in conjunction with Savanna’s Act,” Cortez Masto said about the Not Invisible Act.

In the meantime, a bipartisan group of legislators in the House and Senate, including members of the Senate Committee on Indian Affairs and the House Subcommittee for Indigenous Peoples, sent a letter to the Government Accountability Office (GAO) asking Comptroller General Gene Dodaro to conduct a study on missing and murdered indigenous women on May 7.

The letter said that these members of Congress had “heard from federal officials, tribal leaders, and members of families directly impacted by the [missing and murdered indigenous women] crisis,” and that “all agreed that failures in cross-jurisdictional coordination, inadequate MMIW reporting protocols, and poor data collection limit the effectiveness of efforts to track, investigate, and solve MMIW cases.”

In a visit to Alaska in late May, Attorney General William Barr expressed his willingness to address the crisis of violence against women in tribal communities.

“We have programs that are directed at violence against women, which is a major problem in some of these communities, and so there are areas we can help — but the important thing is that we don’t just dribble in grants here and there to make ourselves feel good,” Barr said about tribal communities in Alaska.

Despite the bipartisanship displayed with Savanna’s Act, the Not Invisible Act and the letter to the GAO, not all legislation addressing the crisis has support from members of both parties.

The Violence Against Women Act (VAWA) reauthorization passed by the House this year included several amendments intended to address the crisis, including one authored by Haaland that would provide victim advocate services to in state courts for Native women living in cities. Another amendment would require the GAO to submit a report on the response of law enforcement agencies on the crisis.

The 2013 reauthorization of VAWA included a provision allowing tribal law enforcement to prosecute non-Native perpetrators in cases of domestic violence. The bill passed in the House this year now includes a provision that would expand the definition of domestic violence in the Indian Civil Rights Act of 1968 to include violence against children and elders. It also recognizes tribal jurisdiction over crimes other than domestic violence, such as sexual assault.

However, Republicans in the Senate have taken issue to some of the provisions added by the Democratic majority in the House version of the bill, like allowing transgender individuals in women’s shelters and preventing gun sales to convicted abusers and those found guilty of stalking misdemeanors. Some Republicans also oppose the extension of tribal prosecution to non-Native persons charged with violent crimes.

On May 7, Democratic senators took to the Senate floor to condemn their Republican colleagues for not being willing to support VAWA.

“We cannot allow this bill to be buried in the majority leader’s so-called ‘legislative graveyard,'” said Udall, referring to Senate Majority Leader Mitch McConnell’s vow not to take up progressive legislation that passed in the House.

A spokesman for McConnell told CBS News that there were no announcements on the House version of VAWA, but that work has been underway on similar legislation in the Senate, which is being crafted by Republican Sen. Joni Ernst and Democratic Sen. Dianne Feinstein. He also blamed Democrats for allowing VAWA to expire in order to tack on the controversial provisions.

In her interview with CBS News, Cortez Masto condemned Republican opponents of VAWA.

“Unfortunately, some of my Republican colleagues want to take out any funding or support for our tribal communities,” Cortez Masto said. “It shouldn’t be an issue.”

Nonetheless, while a stalemate continues over VAWA, it’s likely that Savanna’s Act and the Not Invisible Act are headed for passage in Congress.

“I haven’t heard of any opposition so far,” Haaland said about Savanna’s Act. “We have a lot of bipartisan support.”

The states with the highest populations of Native Americans are a mix of traditionally red and blue states. Cortez Masto, who worked with tribal communities to combat sex trafficking as Nevada’s attorney general, emphasized how it was important to raise national awareness about the issue. If the crisis is more widely known, obtaining data on missing and murdered women will be considered more critical.

“This is an epidemic,” she said.