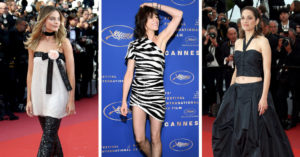 CANNES – Bong Joon-ho of South Korea won the Palme d’Or, the Cannes Film Festival’s top prize, on Saturday for his seventh feature film, “Parasite.” It’s the first time the director has won what is considered by many the highest honor in world cinema.

French-Senegalese director Mati Diop, in her first time at Cannes and as the first black woman in competition in the festival’s 72-year history, won the Grand Prix award for her first narrative feature “Atlantics,” a magical-realist take on migration in Senegal.

Meanwhile, the prize for best director went to the Dardenne brothers for “Young Ahmed” and the screenwriting prize was awarded to Celine Sciamma for “Portrait of a Lady on Fire.”

Emily Beecham was named best actress for her performance in Jennifer Hausner’s “Little Joe” while Antonio Banderas won the best actor prize for Pedro Almodovar’s “Pain and Glory,” in which he played a version of the director in Almodovar’s fictionalized autobiography.

Camera d’Or, the award for best first feature, went to Cesar Diaz for “Our Mothers,” screening in the Critics Week strand of the festival.

Speculation abounded as to whom the Alejandro Inarritu-led jury would bestow honors, particularly given this year’s director-heavy ranks including Yorgos Lanthimos (“The Favourite”), Alice Rohrwacher (“Happy As Lazzaro”), Kelly Reichardt (“Certain Women”) and Pawel Pawlikowski (“Cold War”). Predicting the Palme d’Or has long been considered a fool’s errand, and this jury contained many strong, distinctive voices.

The decision to award Bong the Palme was not wholly unexpected and was a welcome choice among critics, many of whom had lobbied hard for the film as it competed against films by other Cannes heavyweights including Almodovar, Quentin Tarantino and Ken Loach.

For more festival highlights, read on.

Cannes in festival fever is a curious beast: a place where you can walk past “Avengers: Endgame” co-director Joe Russo wandering the street unmolested, but where Argentine provocateur Gaspar Noe is mobbed after subjecting an audience to 10 straight minutes of strobe lighting.

That’s not to say multibillion-dollar franchises hold no currency here — the busy film market keeps the lights on for everyone, after all — but the festival knows what it likes and isn’t about to change its stripes any time soon.

After much Netflix-related hand-wringing, it ended up being a classic year. The Cannes old boys’ club was out in force, with new films from Jim Jarmusch, Almodovar, Loach, Terrence Malick, Tarantino and Luc and Jean-Pierre Dardenne. Some were well received, others considered lesser works, but most showed seasoned directors sticking to their respective lanes.

Tarantino’s “Once Upon A Time… In Hollywood” and Malick’s “A Hidden Life” were described as a return to form. The former was a typically garrulous eulogy to Hollywood’s golden era co-opting the murder of Sharon Tate, the latter an ode to personal faith via the story of conscientious objector Franz Jaegerstaetter. Both directors played fast and loose with history and had critics wondering whether some cuts — particularly in Tarantino’s third act — might have helped their causes here.

The Dardenne brothers’ “Young Ahmed,” about the radicalization of a young Muslim in Belgium, was less provocative than it looked on paper. The same couldn’t be said for Abdellatif Kechiche’s “Mektoub, My Love: Intermezzo,” a “three-and-a-half-hour testament to twerking” and male gaze bonanza.

Offering a tonic were first-timers Sciamma and Diop, who respectively lit up the competition with “Portrait of a Lady on Fire,” a lesbian romance set in 18th-century France, and “Atlantics,” a magical-realist take on Senegalese migration.

Diop became the first black woman in competition in the festival’s 72-year history, while Leyna Bloom became the first transgender lead in the official selection in “Port Authority,” a New York-set love story revolving around the kiki ballroom scene.

Burnishing her film’s credentials, Sciamma, one of the founders of the “5050×2020” gender equality moment, proved it wasn’t hard to make amazing cinema with women on both sides of the camera and for the film’s news conference brought out an all-female panel.

But for all the buzz at the Palais, the festival’s undisputed breakout hit was to be found over at the Directors’ Fortnight sidebar.

Robert Egger’s riotous “The Lighthouse” placed Willem Dafoe and Robert Pattinson’s salty seadogs on a rocky crag and let them fight like the last two rats in a barrel. Among Cannes’ most avant-garde titles, Egger’s hallucinogenic shanty watched like sniffing glue then passing out to “Moby Dick” on TCM. Festival staff had to contend with umbrella-totting crowds queuing around the block to catch a glimpse.

Avoiding the rain, “Rocketman” and “Once Upon A Time… In Hollywood” vied for the title of the busiest gala.

Elton John arrived sequined and ready to rock for his biopic and by the time the credits rolled, he and star Taron Egerton were both in tears. There were tears of frustration, meanwhile, at the Tarantino premiere as many guests were turned away from the gala despite holding much-prized invitations (the festival later apologized).

The undisputed queen of the red carpet this year was Elle Fanning. Still riding a wave of Met Gala praise, the 21-year-old juror cycled through Gucci and Valentino before peaking with a ’40s-inspired Dior couture confection at the Tarantino premiere. Not receiving the positive PR was Prada: Fanning said she fainted in a 1950s Prada prom dress at a party the night before, later claiming on Instagram that it was too tight.

Protests returned to the steps of the Palais again this year when pro-choice activists made their voices heard at a special screening of Juan Solanas’ Argentine abortion documentary “Let It Be Law.”

As the press leave the French Riviera, exhausted and afraid to look another bottle of rosé in the eye, what are the main takeaways?

Well, cinema and its spiritual home is still alive.

Cannes has manned the barricades against the streaming giants, mandated in part by French law stipulating a three-year gap between theatrical and streaming release. The festival’s policy has no doubt offered pause for thought to some directors tempted by Netflix’s juicy deals, but how long that will hold, given the illustrious lineup at Venice last year remains to be seen. But no one really believes the impasse between Cannes and Netflix can last forever.

Perhaps instead a bigger programming battle the festival faces is between a clique of venerable filmmakers on a downward curve occupying competition slots that a fresh generation is more than capable of filling with radical new visions.

We’re seven months out from the Academy Awards, but some offerings here already have Oscar buzz. “Parasites” could well become South Korea’s first Best International Feature Film nominee, and Antonio Banderas is being chalked up as an outside bet for the best actor race. And in the wake of “Call Me By Your Name,” could “Portrait of a Lady on Fire” — a more elegant take on a similar story — enter the fray?

That’s all a long way off, but for now, one thing is certain: it hasn’t been dull.