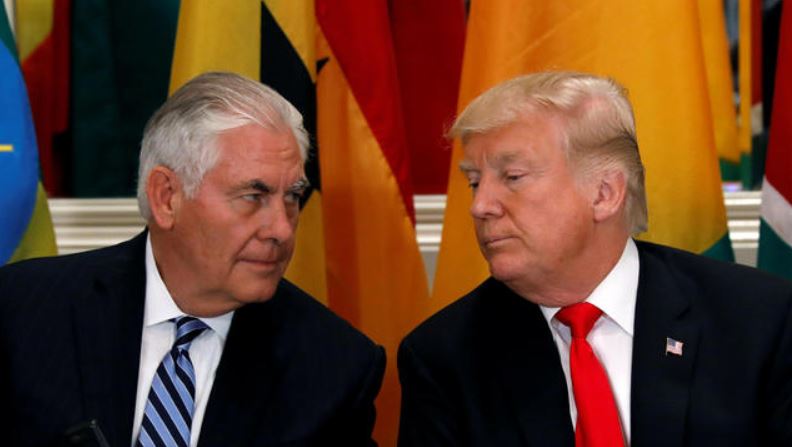 President Trump slammed his former secretary of state over what he called a “made up story” about Russian President Vladimir Putin outmaneuvering Mr. Trump during a 2017 meeting.

Mr. Trump trashed Rex Tillerson on Twitter, calling him “dumb as a rock” and “ill-equipped” to be secretary, despite the fact that he had nominated the former ExxonMobil chief to be America’s top diplomat.

Rex Tillerson, a man who is “dumb as a rock” and totally ill prepared and ill equipped to be Secretary of State, made up a story (he got fired) that I was out-prepared by Vladimir Putin at a meeting in Hamburg, Germany. I don’t think Putin would agree. Look how the U.S. is doing!

The Washington Post reported that during a closed briefing of the House Foreign Affairs Committee Wednesday, Tillerson told lawmakers that the 2017 Hamburg meeting, which took place on the sidelines of the G20 summit of world leaders, was supposed to be brief, but instead went on for over two hours while Putin pushed his geopolitical interests. The Post quoted a committee aide, who said, “There was a discrepancy in preparation, and it created an unequal footing.”

After their meeting, Putin told reporters that he thought Mr. Trump believed his denial of Russian meddling in the U.S. election.

“[Trump] asked a lot of questions on this subject, I was able to answer — answered all of these questions. I think he took this into consideration and agreed, but, in fact, how he reacted to this — ask him,” Putin said in a press conference after meeting with Mr. Trump.

The president has since often sided with Putin when pressed on the topic of Russian interference in the 2016 election, despite his own intelligence community’s assessment that Russia did meddle in the U.S. election process.

“I don’t think Putin would agree,” the president remarked of Tillerson’s assessment on Twitter. “Look how the U.S. is doing.”

Tillerson appeared before the House Foreign Affairs Committee on Wednesday voluntarily and talked about a wide range of issues from his tenure as secretary. His conversations with the panel took place as the administration ramps up pressure on Iran. U.S. officials believe Iran is responsible for attacks on four oil tankers near the Persian gulf. The U.S. insists the threat posed by Iran is intensifying, although allies have said that isn’t the case.

In March 2018, Mr. Trump fired Tillerson with a tweet and replaced him with former CIA Director Mike Pompeo, with whom he appears to have a closer relationship. In December, he tweeted of Pompeo that he’s “doing a great job, I am very proud of him.”