LITTLETON, Colo. — Kendrick Castillo, the teen killed in the shooting at STEM School Highlands Ranch, was laid to rest Friday after a private Catholic funeral. Witnesses say Castillo was the first person to charge the shooter.

“He saved so many people,” Castillo’s friend Charles Burroughs told CBS4 after the shooting.

“Kendrick Castillo died a legend. He died a trooper,” Brendan Bialy said after the shooting. Bialy and a third student, Joshua Jones, helped Castillo take down the shooter. 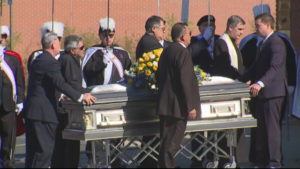 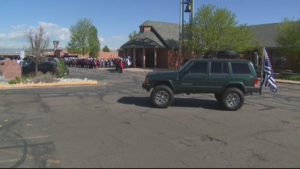 The private funeral for Castillo was held at St. Mary Catholic Church in Littleton. A Knights of Columbus Honor Guard stood at attention, with swords in hand, as Castillo’s casket was wheeled into the church.

Castillo’s lifted Jeep was in the parking lot, with a black, white and blue American flag mounted on the back. Castillo’s friends said he loved Jeeps and off-roading.

Earlier in the week, hundreds of Jeep drivers lined up to helped escort his casket to the celebration of life. Though hardly any of the Jeep drivers in the processional knew Castillo personally, they all expressed extreme gratitude for his heroism. 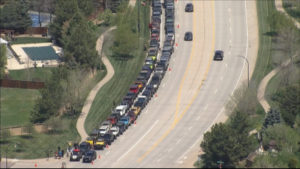 Thousands of people attended the public memorial for Castillo at Cherry Hills Church in Littleton on Wednesday.

After the private funeral on Friday, a procession escorted Castillo to Seven Stones Chatfield in Littleton.