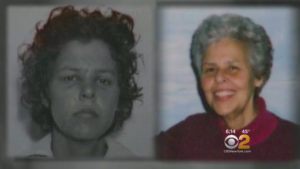 NEW YORK – Judith Clark, a radical leftist who was convicted of being the getaway driver in the deadly 1981 Brink’s truck robbery in upstate New York, was released on parole Friday at the age of 69. Two police officers, Sgt. Edward O’Grady and Officer Waverly Brown were killed along with Peter Paige, a Brink’s guard in the attempted heist of the $1.6 million armored truck.

Clark will live in Manhattan. She will “be closely supervised to ensure her full compliance with all of the conditions of her parole,” Mailey said.

Clark was a member of radical ’60s groups such as the Weather Underground and its offshoot May 19 Communist Organization. The Oct. 20, 1981 robbery had been intended to fund radical groups. At her trial, Clark refused to participate and represented herself.

Clark had been sentenced to 75 years to life but was granted clemency in 2016 by Gov. Andrew Cuomo. Cuomo praised her as a model prisoner and supporters said she embodied the prison system’s ideals as an institution of rehabilitation rather than retribution.

But some law enforcement officials, politicians, and families of victims opposed her release.

“While this is a wonderful day for Judy Clark and her family, she recognizes that news of her release may cause upset to the victims’ families and wants to express her ongoing concern for these communities,” her family said in a prepared statement. “She plans to live her life outside, as she did inside, in atonement for the harm she caused.”

In a 2-1 decision on April 17 granting her release, the parole board noted that Clark’s original life sentence was ordered in part because of her “unrepentant behavior and refusal of counsel.” The board said she had since disavowed her anarchist political views and apologized to the community and her victims.

The board listed Clark’s numerous achievements in prison, including earning a master’s degree, training service dogs for veterans and law enforcement, founding an AIDS education program, securing a college program for inmates and working in a prison nursery mentoring new mothers.

The dissenting board member cited the violence of the crime, the impact on the families of the slain officers and guard and Clark’s involvement in the revolutionary May 19th Communist Organization that was founded by members of the Weather Underground and Black Liberation Army in the late 70s. In addition to the Brink’s robbery, May 19th committed a series of bombings at government and military buildings.

Her lawyers said Clark will live with a friend in New York City and work for Hour Children, an organization that helps incarcerated women and their children rejoin the community.