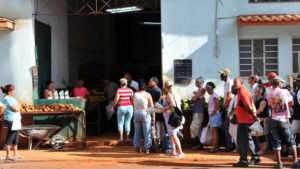 HAVANA, Cuba — The Cuban government announced Friday it is launching widespread rationing of chicken, eggs, rice, beans, soap, and other basic products in the face of a grave economic crisis. Commerce Minister Betsy Díaz Velázquez told the state-run Cuban News Agency that various forms of rationing would be employed in order to deal with shortages of staple foods.

Díaz blamed the hardening of the U.S. trade embargo by the Trump administration. Economists give equal or greater blame to a plunge in aid from Venezuela, where the collapse of the state-run oil company has led to a nearly two-thirds cut in shipments of subsidized fuel that Cuba used for power and to earn hard currency on the open market.

Cuba imports roughly two-thirds of its food at an annual cost of more than $2 billion and brief shortages of individual products have been common for years. In recent months, a growing number of products have started to go missing for days or weeks at a time, and long lines have sprung up within minutes of the appearance of scarce products like chicken or flour.

“The country’s going through a tough moment. This is the right response. Without this, there’ll be hoarders. I just got out of work and I was able to buy hot dogs,” said Lazara García, a 56-year-old tobacco factory worker.

Limited rationing of certain products has already begun in many parts of the country, with stores limiting the number of items like bottles of cooking oil that a single shopper can purchase. The policy announced by Díaz appears to go further and apply the same standards across the country of 11 million people.

Díaz provided a grim series of statistics on food production by the state-run sector, which has found itself struggling to find the cash it needs to pay for basic inputs. She said that in March Cuba produced 900,000 fewer eggs than the 5.7 million needed daily to satisfy national demand. That deficit shrank to 600,000 by mid-April, she said.

The production of pork, the most-consumed meat in Cuba and a normally affordable staple of most people’s diets, is hundreds of tons below target.

“Selling limited quantities will lead to equal distribution so that the greatest number of people can buy the product, and we can avoid hoarding,” she said.