LONDON – The waiting game is over. Prince Harry and Meghan, the Duke and Duchess of Sussex, have named their first child, a son born on Monday, Archie Harrison Mountbatten-Windsor. The royal couple made the announcement Wednesday via their official Instagram account, ending several days of feverish speculation about the baby’s name.

The announcement came with a black and white photo showing Queen Elizabeth II meeting her new grandson. The monarch was flanked by her husband Prince Philip, her grandson Prince Harry while at Meghan’s side stood her mother, Doria Ragland. 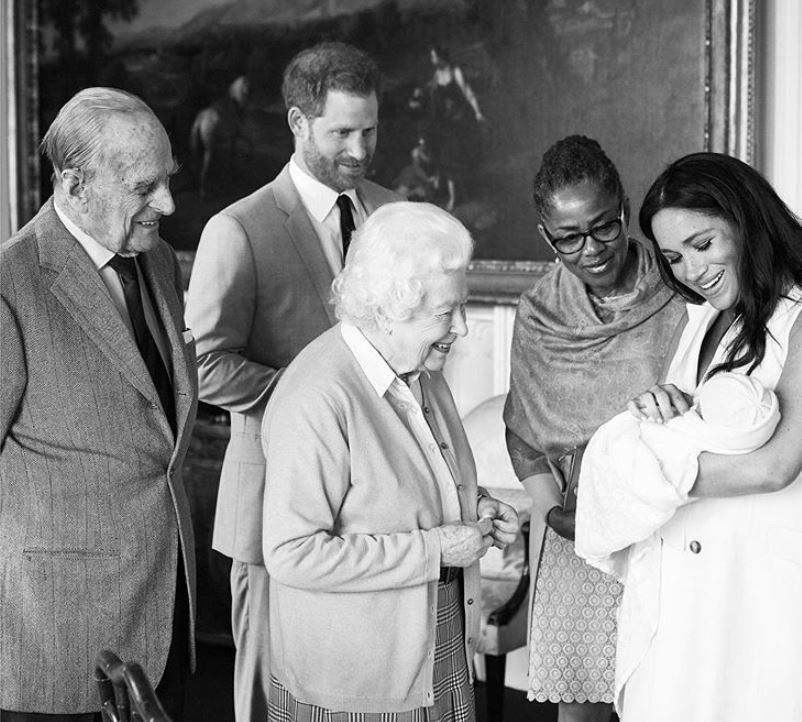 Archie became the 7th in line to the British throne the instant he was born, but he won’t be called “his royal highness,” as the rules around the granting of royal titles were tightened up about 100 years ago.

Britain’s booming betting business had shown before Wednesday’s announcement that a lot of punters expected the new baby to be named Alexander, Arthur, Philip or a handful of other go-to historical British royal names.

Earlier on Wednesday Harry and Meghan introduced their son to the world in a highly-orchestrated photo opportunity at Windsor Castle, but they declined at the time to give his name.

Meghan, who appeared happy and healthy, said her son had “been a dream” and has the “sweetest temperament, he’s really calm.” The new-born slept right through his first media encounter.

“It’s magic, it’s pretty amazing, and I have the two best guys in the world, so I’m really happy,” she said during her son’s first brief encounter with a television camera.

“His looks are changing every single day,” Harry noted. “Parenting is amazing. It’s only been, what, two and a half days, three days, but we’re just so thrilled to have our own little bundle of joy, and to be able to spend some special time with him as he slowly starts to grow up.”

“He’s already got a little bit of facial hair as well,” the bearded prince joked.

Harry and Meghan thanked the public for their well-wishes before they left the camera position, Harry cradling their son in his arms and Meghan resting her arm around his shoulders.

Queen Elizabeth II was expected to meet her new great-grandson — her eighth great-grandchild and now the 7th in line to the British throne — and his parents later on Wednesday.

Meghan gave birth to the couple’s first child at 5:26 a.m. local time on Monday. He weighed 7 pounds and 3 ounces, and Harry said on the day that both mom and baby were doing well.

Meghan had hoped and planned for a home birth, but it has been widely reported — though not yet confirmed by the palace — that in the end the royal couple welcomed their first child into the world in a London hospital.

Many newspapers and royal observers have said Meghan gave birth at London’s Portland Hospital for Women and Children, an exclusive private facility in the heart of the British capital. Buckingham Palace has issued no statement on the reports, but has not refuted them.

On Monday, new dad Prince Harry beamed as he announced his son’s birth.

“I am so incredibly proud of my wife, and as every father and parent would ever say, your baby is absolutely amazing, but this little thing is absolutely to die for, so I am just over the moon,” Harry told reporters. “Thank you very much guys. Thank you.”

Royal reporter Roya Nikkah said this royal baby was always going to be unlike any other.

“We now have the first British-American prince born into the royal family, that’s a landmark moment,” she said. “I suppose it shows how… international and diverse we are as a society.”