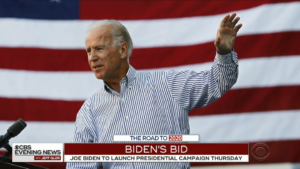 Former Vice President Joe Biden will launch his long-anticipated presidential campaign on Thursday, according to several people familiar with the plans.

Biden will announce his intentions in a video announcement and hold a fundraiser Thursday evening in Philadelphia. His first formal campaign event is scheduled for Monday in Pittsburgh, said the people who were granted anonymity to speak frankly about Biden’s plans.

A conference call on Tuesday among several people set to be involved with the campaign was held Tuesday to firm up the plans. Many of these people have described rapidly evolving plans in recent days that at one time or another included a launch on Wednesday and the possibility of rallies in multiple cities on the same day. But those plans have been scrapped, the people said.

After his stop in Pittsburgh Monday, Biden is set to visit the early primary states. Early on, he is expected to put special emphasis on South Carolina, where he enjoys strong support from longtime Democratic leaders including House Majority Whip James Clyburn, a Democrat.

Seemingly confirming the plans, Biden’s political action committee (PAC), American Possibilities, sent an email to supporters around midday urging them to be poised for news.

“We’ll cut to the chase,” the message read. “There has been a lot of chatter about what Joe Biden plans to do. As one of Joe’s top supporters, we want you to be the first to know!”

The email included a link to a signup page for the PAC, which has mostly served as a vehicle for Biden to conduct political travel on behalf of other Democrats.

Biden has been publicly mulling a bid for months, and while he is leading in most polls, he will start at a fundraising disadvantage from other candidates who already raised millions in the first fundraising quarter of the year.

He has faced some criticism for some his positions during his lengthy time as a senator, particularly his role in the Anita Hill hearings and his support for the 1994 crime bill. He has also been subject to some scrutiny for allegedly touching women inappropriately throughout his career.