Young people don’t want to live in Mississippi because of the flag, Republican candidate says 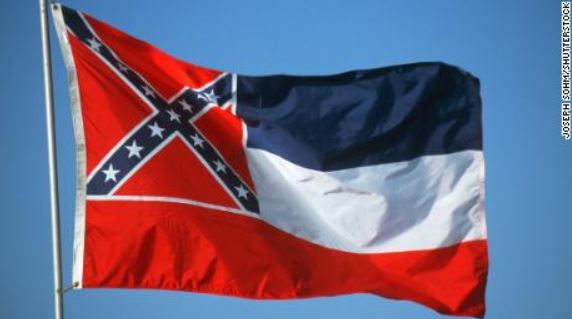 Republican candidate for attorney general of Mississippi believes young people are leaving the state because of the flag, which features a Confederate emblem.

Andy Taggart suggested the state design a new one that does not include the Confederate battle flag.

Speaking to local newspaper The Clarion Ledger, Taggart said Mississippi is stuck looking to the past and that a new flag would show the state is focused on the future.

“Unlike monuments, unlike street names, unlike building names, our state flag is supposed to be the banner under which all of us march and is a symbol of unity for all of us in the state of Mississippi,” Taggart said. “And no matter how strongly people feel… every objective observer would have to agree: Our current state flag is not a banner that unifies Mississippians.”

Taggart said he thinks changing the flag is important if Mississippi wants to recruit young residents and get them to stay.

Before Taggart, no other Republican candidate for statewide office has spoken out about the flag as a major issue for this year’s campaign, the Clarion Ledger reports.

Any decision to change the flag would be up to the legislature, not whoever’s elected attorney general. But Taggart said it’s important to have someone in a statewide office championing a new flag. He believes that would give lawmakers “conservative cover” to support the change.

Jennifer Riley Collins, the only Democrat running for attorney general, had a more guarded opinion than Taggart when asked about the flag. “For me the issue is less about taking the current flag down and denying any part of the state’s history but instead more about lifting a flag that represents the pride all Mississippians have for our state,” she said, according to the Clarion Ledger.

One of Taggart’s primary opponents, Republican state Rep. Mark Baker,  said campaigning to change the flag is “just for stirring up stuff.”

“I don’t really understand what the motivation is,” Baker told the Clarion Ledger.

State Treasurer Lynn Fitch, who is also a Republican candidate for attorney general, has previously supported changing the flag but has not made it a campaign issue, according to the Clarion Ledger.

Mississippi is the only state to feature the Confederate battle flag on its state flag, the Clarion Ledger reports. The state’s three historically black public universities stopped flying the state flag years ago.

Following the violent 2017 white supremacist rally in Charlottesville, Virginia, there was a renewed push across the South to take down Confederate monuments, which sparked widespread debate across the country.

Then-Virginia Gov. Terry McAuliffe encouraged his state’s lawmakers to remove Confederate statues. The mayor of Birmingham, Alabama, ordered a 52-foot-tall obelisk honoring Confederate soldiers and sailors to be covered. And even legislators in northern states like New York and New Jersey ordered the removal of Confederate monuments.