Trump fires up base in Michigan: “The collusion delusion is over”

Feeling vindicated by the Justice Department’s summary of special counsel Robert Mueller’s report, President Trump celebrated the end of the “Russia hoax” with his ardent supporters in Michigan, a state that helped fuel his poll-defying triumph in 2016 and which will be crucial for his reelection bid next year.

In his first campaign rally since Attorney General William Barr released his summary of Mueller’s two-year investigation, which did not establish the Trump campaign “colluded or coordinated” with the Russian government in their election interference effort, the president touted what he called the “total” and “complete” exoneration of his presidency.

“The Russia hoax is finally dead,” he told the boisterous crowd in Grand Rapids, adding later, “The collusion delusion is over.”

As he has done in the past four days, Mr. Trump misrepresented the Justice Department summary of Mueller’s investigation, claiming on Thursday evening that Mueller found “no obstruction.”

According to the four-page summary authored by Barr, Mueller did not find evidence of collusion between the Trump campaign and Moscow, but the special counsel did not reach a conclusion in his probe into whether the president obstructed justice.

“While this report does not conclude that the president committed a crime, it also does not exonerate him,” Mueller’s report read, according to the Justice Department summary.

Barr, and his deputy, Rod Rosenstein, determined the evidence gathered by Mueller did not establish Mr. Trump had committed an obstruction-of-justice offense.

Nevertheless, an energized Mr. Trump lashed out at Democrats for supporting probes into his conduct, policies and business dealings, accusing them of concocting a “sinister effort” to relitigate the 2016 presidential election and undermine his administration.

“The Democrats now have to decide if they want to keep defrauding the public with ridiculous bullshit and partisan investigations, or whether they will apologize to the American people,” he told his supporters.

In the days since the release of Barr’s four-page summary of Mueller’s report, the president has pivoted to health care, a subject that helped propel Democrats to victory in the 2018 midterms elections. This week, the Justice Department asked a federal appeals court to invalidate the entire Affordable Care Act, something Mr. Trump and Republicans failed to accomplish when they controlled both chambers of Congress.

Here are some of the most noteworthy moments from the rally: 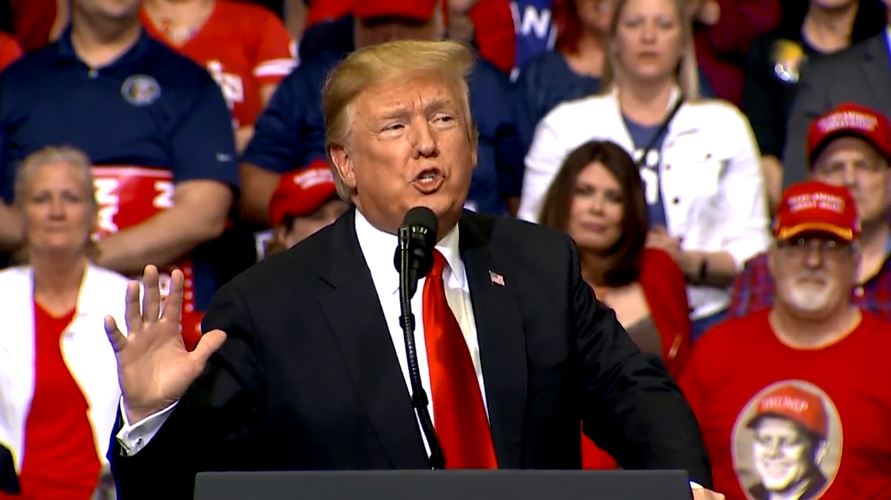 President Trump tweeted after the rally that there were “massive overflow crowds” and posted a video showing crowds outside the arena.

Mr. Trump also tweeted it was a “beautiful rally” and “thank you, I love you!”

After the rally, Mr. Trump flew to Florida, where he plans to spend the weekend at Mar-a-Lago.

Democrats are the party of hoaxes, late-term abortion and open borders, Trump claims

The president falsely claimed Democrats are backing “extreme late-term abortion” that would “allow children to be ripped from their mother’s womb right up until the moment of birth.”

Appealing to the Michigan crowd, Mr. Trump vowed his government will allocate $300 million for the Great Lakes Restoration Initiative, a cleanup effort started by the Obama administration in 2010.

The president’s pledge appears to be yet another reversal from one of the cuts outlined in his administration’s new budget proposal, which suggested slashing funding to the restoration program to $30 million.

Earlier Thursday, the president said officials in his administration were “overridden” to stop a cut to federal funding for the Special Olympics.

The president said Democrats have two options: continue investigations into his conduct, policies and business dealings, or apologize to him and agree to support his political agenda.

“The Democrats now have to decide if they want to keep defrauding the public with ridiculous bullshit and partisan investigations, or whether they will apologize to the American people,” he told the crowd

Mr. Trump urged Democrats to work with his administration to broker deals on infrastructure and trade.

To chants of “lock them up,” Trump calls for his critics to be held “accountable”

Provoking fervent chants of “lock them up!” among his supporters, the president called on his detractors to be held accountable for supporting an investigation into possible collusion between his presidential campaign and the Kremlin, which Mueller did not establish in his probe.

“Lock them up!” the raucous crowded repeated.

Trump: “The collusion delusion is over”

Firing up the crowd, the president wasted no time to praise the Justice Department’s summary of Mueller’s final report, which he said represented a “complete” and “total” exoneration of his presidency.

“The Russia hoax is finally dead,” he said, adding later, “The collusion delusion is over.”

The president slammed Democrats for orchestrating what he called a “sinister effort” to undermine his poll-defying triumph during the 2016 election, which he accused his critics in government and the media of trying to relitigate through false accusations.

Escalating his recent attacks against the Affordable Care Act, President Trump predicted the health care law, which insures millions of American, will be “terminated” in court.

“We’re winning the Texas lawsuit and right now we’re on the winning side. And hopefully we’ll win at the appellate division and go to the Supreme Court to terminate Obamacare,” Mr. Trump said, referring to the lawsuit by a coalition of Republican attorneys general against the law, President Obama’s signature domestic achievement.

The president, who has asked a group of Republican senators to devise a replacement for the Obama-era law, said his party will come up with “something that’s really spectacular.”

This week, the Justice Department asked a federal appeals court to invalidate the entire Affordable Care Act, prompting Democrats to launch a media blitz on health care and the need to protect the coverage of those with pre-existing conditions, an issue they ran on successfully during the 2018 midterm elections.

The decision by the Justice Department, as well as Mr. Trump’s renewed condemnation of the health care law, has unnerved some Republicans who believe the White House should be focusing on Attorney General Wiliam Barr’s summary of special counsel Robert Mueller’s report, which did not establish the Trump campaign “conspired or coordinated” with the Russian government.

Departing the White House, President Trump said he has “overridden” people in his administration to reverse a proposed cut to funding for the Special Olympics.

As part of a budget proposal to slash $7 billion funds from the Department of Education, the administration proposed cutting the approximately $18 million in federal funding to the Special Olympics. The proposal provoked a public outcry and condemnation in Congress, including among some Republicans like Utah Sen. Mitt Romney, who was president of the organizing committee for the 2002 Winter Olympics and Paralympics in Salt Lake City.

Michigan Gov. Gretchen Whitmer, a Democrat, demonstrates how a Democrat can win a critical swing state. She defeated her Republican opponent, Bill Schuette, by nearly 10 percent of the vote in 2018.

Whitmer’s campaign re-focused coverage on pocketbook issues, whether it was healthcare or “fix the damn roads.” Voters viewed her as someone who was serious about actually coming up with solutions that were viable and had a chance of actually passing and getting things done.

Some of the criticisms of Hillary Clinton’s campaign was that she didn’t talk about those sorts of issues and embraced more identity politics, not having a clear economic agenda. Whitmer was in a competitive primary with candidates who were running on Medicare-for-All.

Whitmer addressed universal health care as a great objective and something she would love to see, but did not to give everyone in the state of Michigan health care on the campaign trail because there was no clear path to make that happen, especially with a Republican legislature.

As CBS News’ chief Washington correspondent Major Garrett has reported, the president blindsided many Republicans by pivoting to health care so soon, particularly after they welcomed Barr’s conclusions.

Vice President Mike Pence’s chief of staff Marc Short admitted on Fox News Wednesday the administration currently has no plan to replace Obamacare, and that’s something Health and Human Services Secretary Alex Azar will be working on in the weeks and months ahead.

“The Republican Party will become ‘The Party of Healthcare!” Mr. Trump tweeted Tuesday.

Mr. Trump tweeted early Thursday morning that he will be talking about “exciting things” at Thursday night’s rally.

“Will be heading to Grand Rapids, Michigan, tonight for a Big Rally. Will be talking about the many exciting things that are happening to our Country, but also the car companies, & others, that are pouring back into Michigan, Ohio, Pennsylvania, North & South Carolina & all over!” the president tweeted.

Mr. Trump won Michigan, albeit by a slim margin, in 2016, and the president has highlighted the state in his attempt to bring factory jobs back to the U.S.

Ford recently announced it will build a new factory for autonomous vehicles in the Great Lakes State, and as GM closes an auto factory in the state.