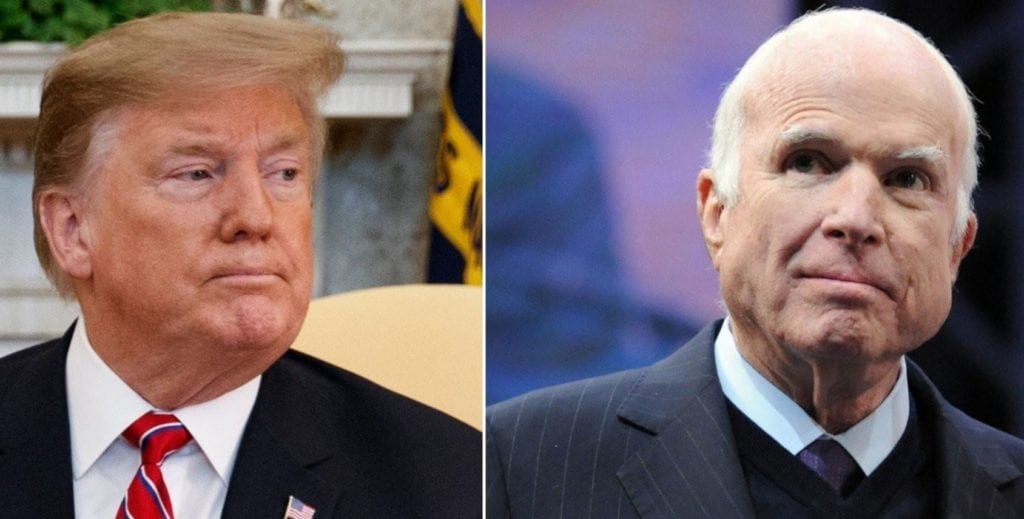 President Trump claims that he’s only spent a “small portion” of time criticizing the late Senator John McCain. However, this past week, Mr. Trump has repeatedly attacked the war hero on social media, at a campaign-style rally and even in an Oval Office meeting with a visiting dignitary.

In an interview with Fox Business Network’s Maria Bartiromo, Mr. Trump defended his ongoing tirades against the dead lawmaker, appearing to blame the media for bringing it up in the first place.

“No, I don’t talk about it. People ask me the question, I didn’t bring this up. You just brought it up, you asked the question,” Mr. Trump said when asked why he continued to attack McCain.

He added, “When they ask me the question, I answer the question. But you people bring it up, I don’t bring it up. I’m not a fan. He was horrible what he did with repeal and replace. What he did to the Republican party and to the nation, and to sick people that could have had great health care was not good. So I’m not a fan of John McCain and that’s fine.”

He later admonished Bartiromo for asking the question, suggesting that she wasn’t “supposed to bring it up” in their wide-ranging discussion and referred to the issue as “fake news.”

Despite his public lashings against a notable political figure, Mr. Trump contends that he’s “bringing the nation together.”

“I can tell you that a big portion of this nation is united like it’s never been united before.  You look at our economy.  You look at jobs.  You look at African American — the lowest in the history of our country, unemployment numbers, the best numbers they’ve ever had,” said Mr. Trump.

Much of the political world is in fact uniting together, with both Republicans and Democrats rejecting the president’s attacks on  McCain. Several of the 2020 Democratic presidential candidates called out the president in the wake of his comments, including Iraq war veteran Pete Buttigieg, who said Mr. Trump was doing it “for attention.”

When a president (who faked a disability in order to avoid serving) attacks a departed war hero, it’s for attention.

We should honor the late Senator McCain, and also follow his example by focusing not on the behavior of the president but on the future of our country.

“We should honor the late Senator McCain, and also follow his example by focusing not on the behavior of the president but on the future of our country,” Buttigieg added.

And in an attempt to smooth over the ongoing spat, Sen. Martha McSally, a fellow Republican and McCain’s Senate seat replacement, told reporters on Thursday that she had spoken to the president to “make sure he understood how I felt about John McCain and how Arizona felt and he heard me.” She added that McCain “deserves respect by everybody.”