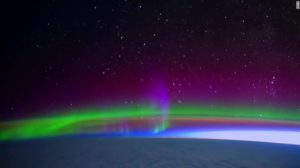 Many Americans and Canadians have a great chance to see the northern lights on Friday night and early Saturday morning.

A solar flare that erupted March 20 is set to slam into Earth on Friday night, prompting the National Oceanic and Atmospheric Administration to issue a G2 watch, or moderate geostorm watch.

The flare will bend around the Earth’s natural magnetic field, and slam into the poles at either end of the planet, which supercharges the northern lights and pushes it deeper.

But fear not, everything is expected to be fine aside from a limited blackout of some high-frequency radio signals and navigation signals.

The good news is the solar flare will give many Americans and Canadians a great chance to view the aurora borealis.

The aurora forecast from the University of Alaska Fairbanks’ Geophysical Institute says the northern lights could be visible overhead across Canada, as well as parts of Minnesota, North Dakota, Montana, Michigan, Maine, New York, Vermont, and New Hampshire.

Chicago, Detroit and parts of states just south of those cities could potentially see the aurora borealis on the horizon.

But to see the aurora, the institute stresses that a “clear and dark sky” is needed. City dwellers and those in high-light polluted areas have a lower chance of seeing the phenomenon.

UAF’s Geophysical Institute says to look for the northern lights about three or four hours around midnight.