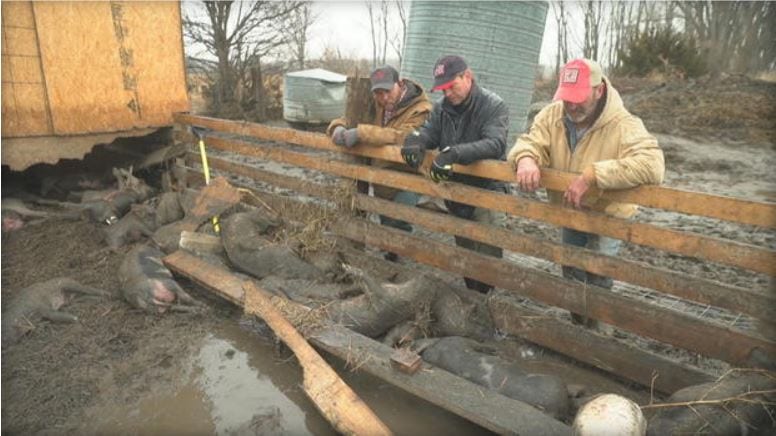 At least three people have died since rivers started overflowing and it won’t let up for the rest of the week. At least 15 states are under watches and warnings as floodwaters push downstream toward the Mississippi River Valley.

Doug and Eric Alberts are trying to round up the surviving hogs on their 9-acre farm in Fremont, Nebraska. There aren’t many. The family estimates they were only able to save 14 out of 700 of their livestock.

The father and son have worked for three years to build this business. Then, a few days ago, the water came.

Within minutes, 7 feet of water covered their farm.

When the men returned Tuesday, they found dead hogs everywhere.

“Honestly, I didn’t expect to see nothing alive, from the pictures we’d seen,” Eric told CBS News. “When we came in with the boat and it was still 5 feet deep… we didn’t expect nothing to be here.”

Throughout the Farm Belt, it’s the same story of devastation. The same images of loss. In Nebraska alone, more than 17 areas saw record flooding. There were 65 counties and four tribal areas have issued emergency declarations. Homes have been wiped out. It’s estimated farm losses could exceed $1 billion.

Unlike many farmers, the Alberts have some insurance, but it will only cover a small part of the damage.

“A lot of hard work, start over and hopefully in a year we’ll be able to sell hogs again,” Doug said.

Nebraska’s governor called this the worst flood damage in state history. In Winslow, a building floated into someone’s backyard and cars are scattered in the mud. Roads and railways are impassable. As the weather warms and snow melts, more flooding is expected in places like North Dakota and Minnesota.