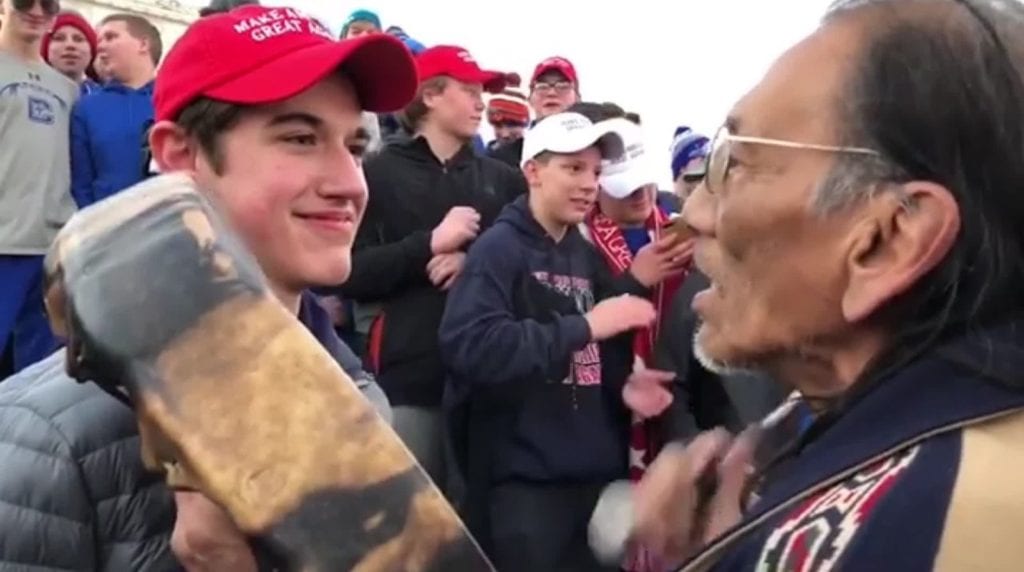 President Trump has weighed in on the controversy surrounding a confrontation Friday at the base of the Lincoln Memorial involving three groups. The incident was caught on video that went viral. The story behind it has evolved several times since first coming to light, and accounts still differ.

The trouble involved a group of five black men shouting vulgar insults while protesting centuries of oppression. Also, dozens of white Catholic high school students visiting Washington for a rally to end abortion. And Native Americans marching to end injustice for indigenous peoples across the globe who have seen their lands overrun by outside settlers.

Mr. Trump tweeted his support Monday night for the students from Covington Catholic High in Park Hills, Kentucky, as some news reports questioned whether early criticism of them was warranted:

Looking like Nick Sandman & Covington Catholic students were treated unfairly with early judgements proving out to be false – smeared by media. Not good, but making big comeback! “New footage shows that media was wrong about teen’s encounter with Native American” @TuckerCarlson

The president added to that on Tuesday morning:

Nick Sandmann and the students of Covington have become symbols of Fake News and how evil it can be. They have captivated the attention of the world, and I know they will use it for the good – maybe even to bring people together. It started off unpleasant, but can end in a dream!

Covington Catholic was closed Tuesday. A letter from the school’s president Robert Rowe, obtained by CBS affiliate WKRC, says that the school would close “to ensure the safety of our students, faculty and staff.”

At the base of the memorial Friday, the three groups met for just a few minutes in an encounter that again cast a spotlight on a polarized nation.

At first the focus was on a short video showing one of the high school students, Nick Sandmann, wearing a red “Make America Great Again” hat and appearing to smirk while a crowd of other teens laughed derisively behind him as a 64-year-old Native American veteran, Nathan Phillips, played a traditional chant on a drum.

Pull back farther and a different view emerges, however, in a separate video showing members of a group calling itself the Black Hebrew Israelites taunting everyone on the mall that day, calling the Native Americans who had gathered there for the Indigenous Peoples March “Uncle Tomahawks” and “$5 Indians” and the high school students “crackers” and worse.