A rare find off Hawaii is captivating shark lovers around the world. Gracefully appearing from the deep – and dwarfing nearby divers – the shark affectionately named “Deep Blue” is one of the largest great whites ever documented.

Marine biologist Ocean Ramsey seen swimming with the shark on Tuesday is still in awe.

“Never would have imagined that a massive, beautiful, great white, looks-like-she’s-pregnant female, would swim up,” Ramsey said.

Divers, researchers, and photographers shared incredible images after a once-in-a-lifetime encounter with the shark off Oahu’s southern coast this week. But the pictures and videos are attracting crowds and prompting warnings from wildlife experts.

Deep Blue was first spotted this week feeding on a dead whale. She’s estimated to be more than 20 feet long, weighing about 2.5 tons – as much as a large SUV.

She is already a star in the scientific community. Researchers have been tracking her for years but said she hasn’t been seen up close since 2015. Ramsey said she documented her encounter to change the public perception of sharks.

“The message I really hope to get across with these beautiful images and video [is] to show that they aren’t the mindless man-eaters that they are so often portrayed as in media, like the movie ‘Jaws,'” Ramsey said. “They deserve a high level of respect and they need protection.”

Deep Blue is so famous, she has her own Twitter page and cameras capture her every move whenever she decides to make a special appearance. Wildlife photographer Kimberly Jeffries, who took new photos of the shark, said shots like hers are especially rare because great whites are naturally reclusive creatures.

“Their habits are so different from ours. They make these really deep dives during the day and then come up to the surface briefly, so it’s no wonder we don’t see them,” Jeffries said.

But since these latest images hit the internet, the shark’s new feeding ground is attracting amateurs who want to get up close and personal to the great white.

“Social media is definitely whipping this into a frenzy,” said Jason Redulla, chief enforcement officer with the Department of Land and Natural Resources. He warned visitors against trying to have their own dive with the animal. 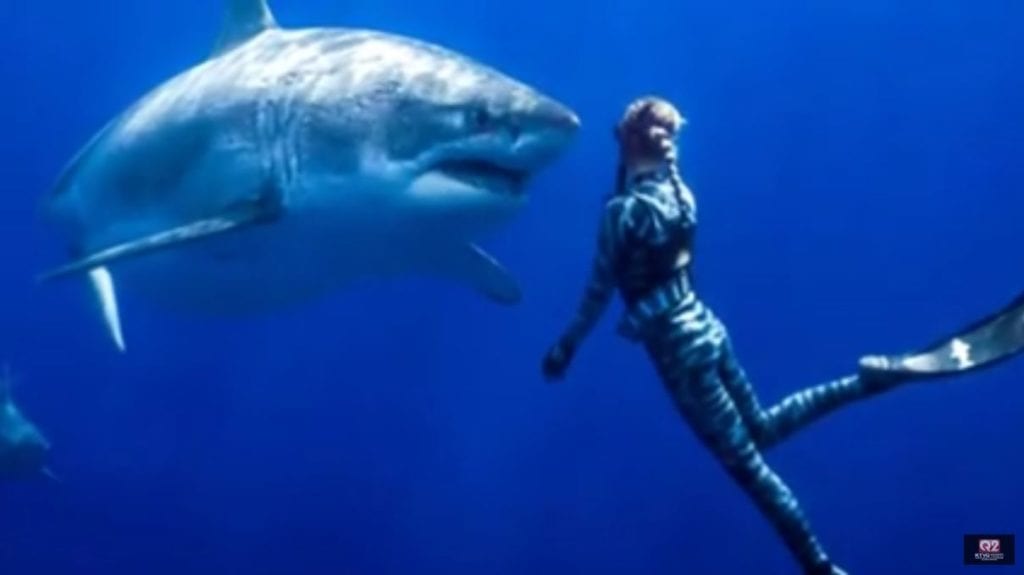 “This is a dangerous mix where we do have sharks in the water, we do have a lot of public interest and really would behoove everyone not to compromise their safety. It’s just not worth it,” Redulla said.

“What do you say to people who might see your pictures and think that shark is still out there, I can go get a selfie with her?” Evans asked Ramsey.

“I would strongly advise against people purposely jumping in the water with a great white shark,” Ramsey responded. “I wouldn’t even be in the water if I wasn’t there purposely trying to document and record IDs and behavior… trying to share that with the public so we could hopefully better co-exist.”