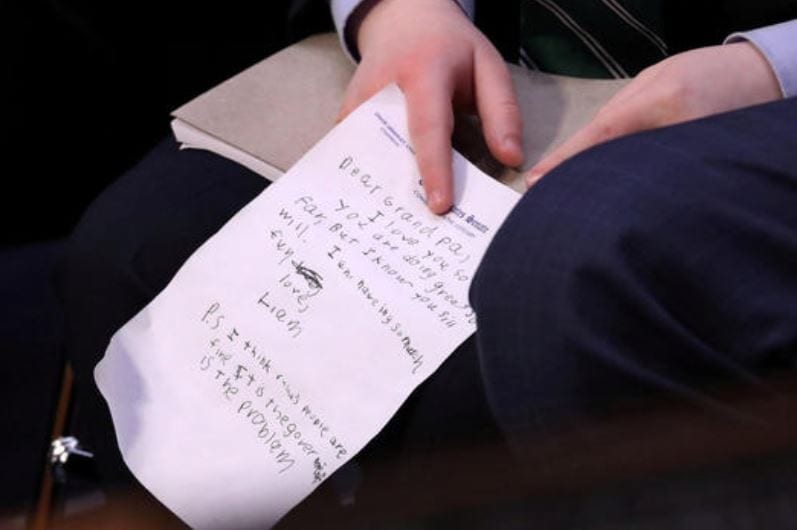 A star is born after the first day of William Barr’s confirmation hearings: His 8-year-old grandson, Liam Daly.

The kin of the U.S. attorney general nominee stole the show Tuesday, with lawmakers on both sides of the aisle unable to stop commenting about him during the hours of hearings.

Liam also wrote a note of encouragement to his grandfather — and even slipped in some foreign policy analysis.

Barr introduced his grandson at the hearing by joking that he’s a future Justice Department employee. That opened the door for senators to start offering career advice.

I had a great conversation with Liam this morning. I’m looking forward to getting to know his grandfather, William Barr, during the Attorney General hearing today. pic.twitter.com/Czq75hhace

Sen. Dick Durbin, D-Illinois, suggested a different path, since several members of Barr’s family have already gone through Justice: “He ought to consider, at least for some balance, being a public defender.”

Sen. Amy Klobuchar, D-Minnesota, commended Liam for taking notes as he sat in the front row of the audience. Sen. John Kennedy, R-Louisiana, tweeted a photo of him holding court with the boy. Sen. Dianne Feinstein, D-California, sent a “care package” of snacks to Liam, and said he “deserves a medal” for sitting through the hours of questioning.

A photo captured one of the notes Liam wrote as his grandfather was grilled by the committee.

“Dear Grandpa, I love you so much You are doing great so far … I am having so much fun,” it read.

He added a P.S., apparently after hearing so much talk from lawmakers about Russian election inference: “I think russia’s people are fine It is the government is the problem.” (CQ)

If you have kids, you know these are the BEST photos of the month. Attorney general nominee Bill Barr's young grandson, Liam, had a notepad during today's confirmation hearing. (Photos: @Reuters) pic.twitter.com/bFotPCgwzR

Liam came up in the conversation so much that reporters at the hearing said he eclipsed some of the biggest issues Barr would face if confirmed to be attorney general.