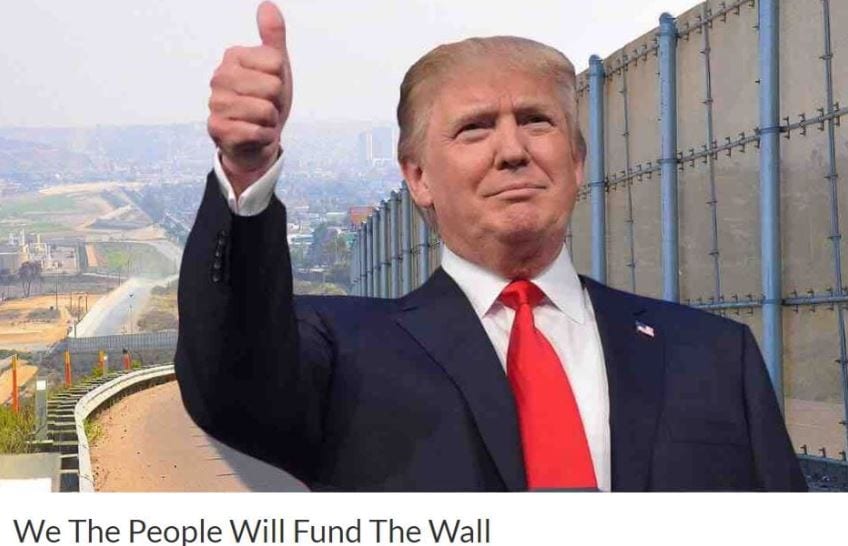 Donors have given Brian Kolfage, the wounded veteran behind the viral GoFundMe “Trump Wall” campaign, permission to transfer at least $7 million to his new plan to privately fund and build a southern border wall, according to Kolfage and another source familiar with the effort.

President Trump has asked Congress for more than $5 billion to build the same project, but Kolfage says he can do it for half the cost.

Kolfage first launched the “Trump Wall” campaign in December, and $20 million was pledged from more than 300,000 people. His original goal was to raise $1 billion and hand over the money to the federal government to subsidize the cost of the wall.

But last Friday, Kolfage changed course and announced that funds would instead go toward his new non-profit, We Build the Wall, Inc., which he said would use contributions to build a wall on private land. In a GoFundMe post, Kolfage wrote that the “federal government won’t be able to accept our donations anytime soon.”

Because of the change and the fact that the initial campaign fell short of the fundraising goal, GoFundMe said donors would automatically get their money back unless they actively opted to roll over their donation to Kolfage’s new venture.

Kolfage and the source close to the campaign claimed that $7 million had been redirected to We Build the Wall, Inc. Kolfage said more than 120,000 donors have chosen this option, a number GoFundMe did not confirm. After initially offering the $7 million figure Tuesday morning, Kolfage later said it was a “guess.”

“Our donors gave to us to get the job done, and they trust us to do so,” Kolfage said in an email to CBS News.

When asked specifically how the money would be spent, Kolfage declined to give specifics and pointed to his recently revised GoFundMe page, which says the the money will “go toward wall construction only.” GoFundMe did not respond to whether the funds had been released to Kolfage yet.

What happens to the remaining $13 million that had been pledged? Donors who take no action will receive refunds by April 11. Those who ask for their money back should get it within 3 business days; more than 8,300 people have asked for that option, according to Kolfage. As GoFundMe processes those refunds, it will update the amount raised — on Wednesday, the page still said more than $20 million had been raised.

In an email to CBS News, Kolfage disputed the BuzzFeed report, claiming that he used the funds to travel to the hospitals where he conducted his mentorship program. He called the piece a “fake article.”

“They [sic] money was raised for my mentor program,” Kolfage wrote in an email to CBS News on Tuesday. “The money wasn’t raised for a hospital or another charity it was raised for me to travel for my award winning mentor trips to visit wounded veterans.”

On his GoFundMe page, Kolfage also provided an address for donors to send checks in case they weren’t comfortable with online transactions. According to Kolfage, he’s received 3,500 mail-in donations, but he said he hasn’t totaled them yet.