Trump says border wall will be built with “shutdown money” 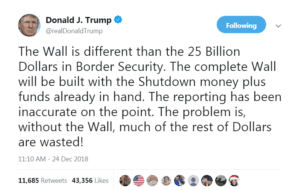 The government will remain partially closed past Christmas as Washington remains deeply divided over budget negotiations and nowhere near a resolution to the shutdown that began early Saturday morning. All sides now anticipate the impasse will continue at least into the first week of January.

President Trump, who is spending the holidays in the White House after canceling a trip to his Mar-a-Lago resort, said on Christmas Eve that a “complete” wall on the southern border will be built with “Shutdown money plus funds already in hand.”

“I am all alone (poor me) in the White House waiting for the Democrats to come back and make a deal on desperately needed Border Security,” Mr. Trump tweeted.

I am all alone (poor me) in the White House waiting for the Democrats to come back and make a deal on desperately needed Border Security. At some point the Democrats not wanting to make a deal will cost our Country more money than the Border Wall we are all talking about. Crazy!

He also blasted the Federal Reverse and said the institution did not “understand” the partial government shutdown. “They don’t have a feel for the Market, they don’t understand necessary Trade Wars or Strong Dollars or even Democrat Shutdowns over Borders,” the president wrote Monday.

Earlier in the morning, Mr. Trump accused Democrats of not supporting funds for a border wall only because he made the issue an integral theme of his campaign. “Virtually every Democrat we are dealing with today strongly supported a Border Wall or Fence. It was only when I made it an important part of my campaign, because people and drugs were pouring into our Country unchecked, that they turned against it. Desperately needed!” he wrote.

On Sunday, incoming acting White House Chief of Staff Mick Mulvaney said the shutdown could continue into the next congressional session in January, when Democrats will gain control of the House of Representatives. “It is very possible that the shutdown will go beyond the 28th and into the new Congress,” Mulvaney said on “Fox News Sunday.”

Negotiations between the White House and congressional Republicans and Democrats reached a stalemate on Saturday over Mr. Trump’s $5 billion demand to fund the construction of a wall along the U.S.-Mexico border. The Senate held a “pro forma” session Monday morning but it did not yield anything. Negotiations will probably not resume until senators reconvene Thursday.

The partial shutdown won’t have much of an effect on holiday plans. The post office will stay open, so gift and holiday card stragglers can still put them in the mail. Transportation Security Administration (TSA) agents will still work, and air travel would continue virtually unaffected.

Government employees who are considered “essential,” such as many Secret Service agents, Customs and Border Patrol agents and U.S. troops deployed at the border, will still be working. But a shutdown creates a risk for hundreds of thousands of federal workers: More than 420,000 federal employees would have to go to work without pay and 380,000 will be furloughed. Those who work will get paid eventually — and those furloughed likely will — but depending how long the shutdown lasts, they could miss a paycheck.