Police in Colorado have released the last known footage of a mother missing since Thanksgiving Day.

Surveillance video shows Kelsey Berreth walking into a Safeway in Woodland Park, Colorado, with her one-year-old daughter and then pushing her in a cart.

According to investigators that same day the 29-year-old dropped her daughter off with the child’s father, her fiancé Patrick Frazee. Berreth was reported missing 10 days later by her mother. Frazee said he last heard from Berreth in a text three days after she disappeared, but it’s unclear why he didn’t report her disappearance to police. 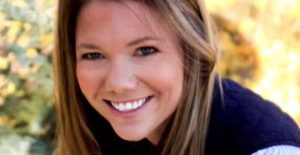 When investigators searched her home they found her cars, her clothes, her toothbrush, even cinnamon rolls apparently untouched since Thanksgiving.

When she texted her fiancé three days after disappearing, police say her cellphone pinged near Gooding, Idaho, nearly 600 miles away. She also texted her employer that day – Doss Aviation, where she was a flight instructor – she would not be showing up to work the following week.

Police said this is a missing person’s case and there are no suspects at this time.