The killing of a 36-year-old South Florida resident who was vacationing in Costa Rica is raising concerns about travel to what was once considered the safest destination in Central America.

The body of Carla Stefaniak, a US citizen who went missing late last month while staying at an apartment complex outside the capital of San Jose, has been found, her family confirmed.

A suspect in the case, Bismarck Espinoza Martinez, 32, is in custody, according to Costa Rican officials. He worked as a security guard at the Airbnb where Stefaniak was staying.

Costa Rica had long been spared the violence that plagued its Central American neighbors, but the country has seen a jump in homicides in recent years. Overall crime also has spiked.

“Crime is increasing in Costa Rica and US citizens are frequent victims,” according to the US Embassy website. “US citizens are encouraged to exercise a high level of caution and vigilance due to increasing levels of violent crime.”

In 2017, the country broke its record for reported homicides with 603, according to InSight Crime, citing official sources. It attributed the increase in part to Costa Rica’s place as a transshipment point for Colombian cocaine destined for the US and Europe.

Costa Rican justice official Michael Soto told reporters at the time that the rate of 12.1 murders per 100,000 inhabitants was the highest in the country’s history, with about a quarter of the deaths designated as drug related. Costa Rica had 578 homicides in 2016.

While the US State Department advises “normal precautions” — the lowest level for safety and security risk — for Americans traveling to Costa Rica, it warns visitors to increase caution in certain neighborhoods, noting violent crimes such as homicides, armed robberies and assaults, with gang and narcotics activity and limited police presence.

“Criminals often operate in small groups, but may also operate alone. While most crimes are nonviolent, some criminals have shown a greater tendency in recent years to use violence,” the US Embassy said.

Stefaniak was in Costa Rica to celebrate her 36th birthday, according to relatives. 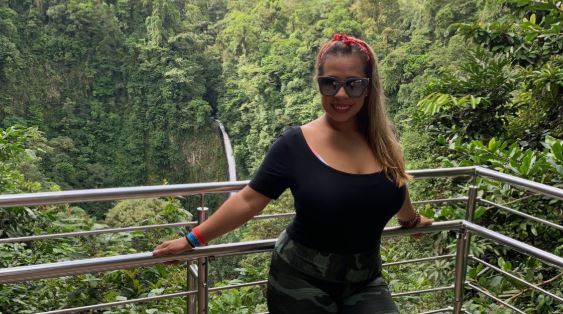 A partially decomposed body was found Monday about 300 yards from the apartment complex where Stefaniak was staying in a province just outside the country’s capital of San Jose, said Walter Espinoza, a spokesman with the nation’s Judicial Investigation Department.

Detectives who interviewed people who had contact with the suspect, Espinoza Martinez, before Stefaniak went missing on November 28 grew suspicious when they noticed his statements were contradictory, Espinoza, the government spokesman, told reporters.

Espinoza Martinez had been staying in the apartment next to Stefaniak’s rental, the spokesman said. The suspect is a Nicaraguan national who has been in Costa Rica since June.

Espinoza Martinez was arrested Monday and is in jail because he is a flight risk, the spokesman said.

An autopsy on Stefaniak showed multiple stab wounds to the “neck and upper extremities,” as well as blunt force trauma to the head, the spokesman said.

Authorities also found stains inside the apartment where Stefaniak was staying, “which are compatible with blood and which will be submitted to further investigation and comparison,” he said.

Relatives became concerned last week after Stefaniak stopped texting and phoning home and was not on her return flight from Costa Rica.

April Burton, her sister-in-law, said the two had gone to Costa Rica to celebrate Stefaniak’s birthday and had traveled together for six days, staying in beach towns outside San Jose.

A day before she went missing, Stefaniak dropped Burton at the airport and returned their rental car.

Stefaniak opted then to stay at a hostel closer to the airport before her flight the next day, her brother, Carlos Caicedo, told WSVN.

Stefaniak and Burton had been texting each other via WhatsApp, Burton said. Then, the messages stopped.

“We will make sure this case is not closed like many others in Costa Rica,” said a post on a Facebook page that has been updated by a family friend.